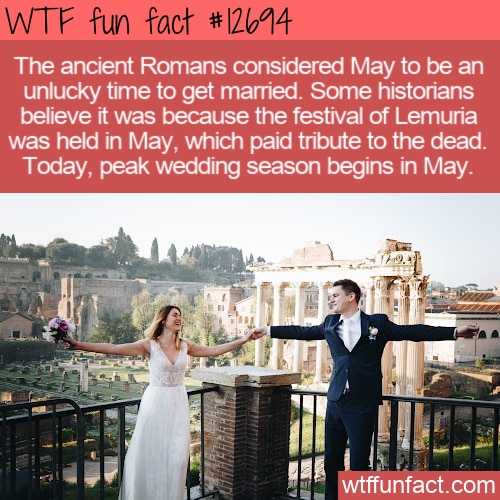 When the ancient Roman poet Ovid’s daughter wanted to marry, Ovid was told by the high priestess to wait until mid-June. The Romans avoided May weddings in general for superstitious reasons. That’s in part because it overlapped with the Lemuria, a near-month-long festival for the dead.

According to Global News, the French weren’t all that fond of May weddings either:

“Another text that dates back to 1840s France supports this idea. It states: ‘The month of May is also in the Black Mountain a month altogether rejected by the young girls who are betrothed; and they frankly say upon the subject, that it is not suitable to marry at a period when the asses are amorous.’ In other words, it’s unsavory to marry when the animals are mating.”

Believe it or not, May superstitions extend all the way to animals – in fact, cats born in May were thought to be bad rodent killers but also bring snakes home with them.

These days, weddings are very common in May. The only day that’s largely off-limits is Mother’s Day. – WTF fun facts

Source: “Here’s why you shouldn’t get married in May” — Global News