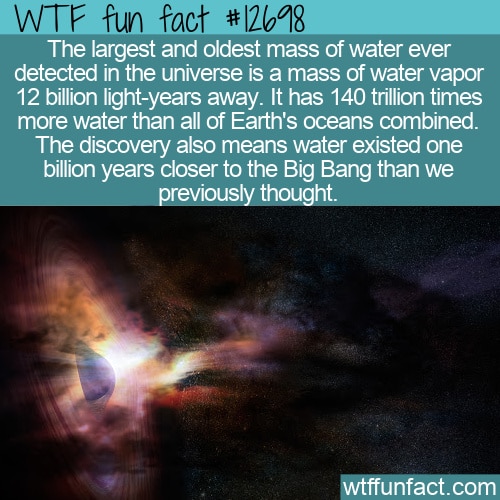 We’re just going to go ahead and admit something to you. When we read about space, the numbers are just too enormous to make much of an impression on us. 140 trillion of anything is just…too big to really imagine, you know?

But when it comes to astronomy, those are the numbers we’re dealing with. Space is just so…vast.

Anyway, that’s all to say that if you look at this fun fact and think “uh, ok, sure,” then you’re not alone.

And the fun fact is that in a galaxy far, far away:

1. Astronomers recently detected a mass of water vapor 12 billion light-years away.
2. That means it took the light from it 12 billion years to reach the earth so we could sense it would our instruments.
3. The cloud of water vapor is located around a quasar, which is a supermassive black hole.
4. There’s not just a little bit of water there, there’s enough water to fill Earth’s oceans 140 trillion (with a T) times.
5. The math tells us that if the cloud is 12 billion years old, then water has been present in the universe much longer than we had imagined.
6. By our calculations, the water was present roughly 1.6 billion years after the Big Bang (aka the beginning of the universe).
7. According to study co-author Alberto Bolatto of the University of Maryland: “This discovery pushes the detection of water one billion years closer to the Big Bang than any previous find.”

Sometimes the universe requires a 7-part fun fact. What can we say?

And if you’re the kind of person who likes to know the details, the quasar the team was studying when they found the water vapor cloud is called APM 08279+5255 and it houses a black hole 20 billion times larger than the sun.

Quasars are the brightest and more powerful objects in the universe, so this one produces 1 quadrillion times the energy of our sun.

Confirmation of the discovery occurred using two different telescopes to ensure the calculations were correct – one was in Hawaii and the other in California.

And while this is a cool find, it doesn’t really change anything about our understanding of how the universe developed since scientists have long assumed that water vapor was probably present very early in the creation of the universe. It was the size of the vapor cloud that surprised astronomers.

So if you feel like your problems are big, just remember that in the grand scheme of things, everything we deal with is really quite small (not unimportant, just small). – WTF fun facts