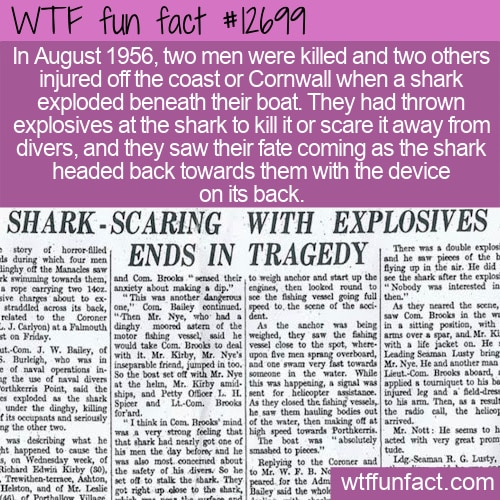 In August 1956, Leslie Nye and Richard Kirby were killed in a shark explosion. Even worse, they saw it coming. And even worse than that, they were the ones that launched the explosives at the sharks to begin with.

But before you assume they got what was coming to them, it’s important to have some context.

This was all part of a military diving exercise and the day before, an officer saw a shark approach the dive team and identified it as a potentially aggressive danger. In fact, he saw the shark swim toward men in the water and turn to its side as if to get its mouth into position to bite. However, it was scared off by bubbles from the divers.

But the next day, sharks started circling the boat again as the men were putting on their gear. Then, a decision was made to scare the sharks off (or kill them – either would have been fine at the time) so the divers wouldn’t be anxious.

That’s when two officers and two civilians boarded a dinghy with a pair of 14oz explosive charges fastened to a rope. Someone threw the rope and it wrapped around the shark’s fin, as planned.

What they didn’t plan for was the shark turning around and heading back for the boat. It ended up underneath the vessel when the charges exploded. All four men were on the boat at the time, but only Nye and Kirby were killed (Brooks and Spicer were seriously injured).

The Coroner ruled the ordeal a “misadventure.”

After the incident, there were rumors that the military was trying to test explosives during the Cold War and used the shark story as a coverup. But it’s just weird enough to be true.

Source: “When an exploding shark killed two men off the coast of Cornwall” — Cornwall Live