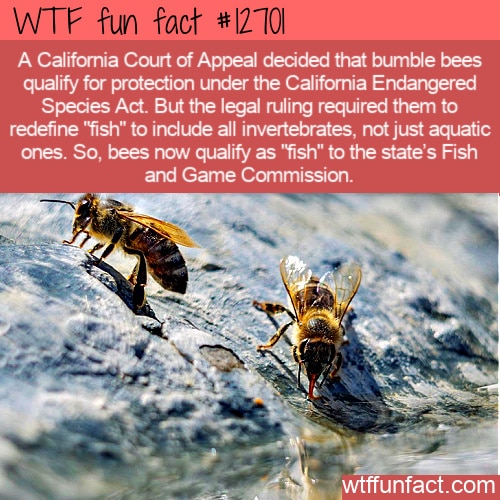 We may not all love bees, but we can’t live without them since they pollinate the crops that make the food we eat (among other integral ecological roles). That makes protecting them integral to our future.

In California, that means considering them “fish” for conservation purposes.

The law is a weird thing sometimes. In this case, it required some creative thinking in order to make sure bees got protected status under the California Endangered Species Act (CESA).

Others had argued that the Act protects only “birds, mammals, fish, amphibians, reptiles, and plants” – in other words, not insects like bees. They won the original court case, but it was just overturned by a Sacramento Court of Appeal.

“While ‘fish’ is ‘commonly understood to refer to aquatic species, the term of art employed by the Legislature … is not so limited,’ Associate Justice Ronald Robie wrote for the appeals court.
CESA itself does not define “fish,” but the law is part of the California Fish and Game Code. The code’s definition includes any ‘mollusk, crustacean, invertebrate (or) amphibian,’ Robie wrote. All those categories ‘encompass terrestrial and aquatic species,’ and the state legislature has already approved the listing of at least one land-based mollusk, the opinion said.
‘Accordingly, a terrestrial invertebrate, like each of the four bumblebee species, may be listed as an endangered or threatened species,’ Robie wrote, joined by Acting Presiding Justice Cole Blease and Associate Justice Andrea Lynn Hoch.'”