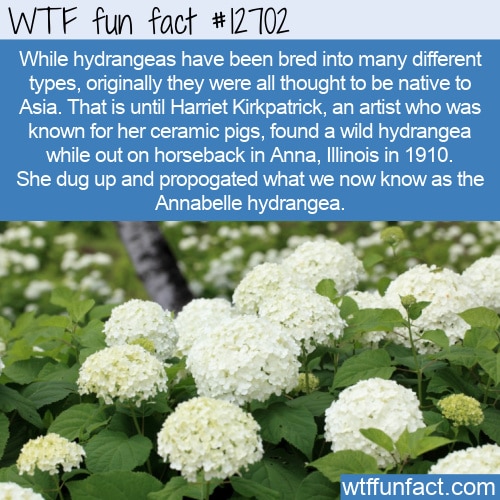 There are nearly 75 species of hydrangea (depending on who you ask) and most hydrangeas are native to Asia. In fact, we once thought all hydrangeas were Asian natives until 1910.

As the story goes, Harriet Kirkpatrick, a wealthy woman from Illinois, was out on horseback one day when she discovered a wild hydrangea along a wooded trail. Known to indigenous Americans, no one else had been aware of it. It’s the variety we know refer to as the “Annabelle” hydrangea (Hydrangea arborescens), also called a “smooth” hydrangea.

As far as we know, Kirkpatrick is responsible for the propagation of the flower since she came back later, dug it up, planted it on her property, and began to share it with her friends.

According to Fairfax Master Gardener Ray Novitske, Kirkpatrick was an artist:

“Kirkpatrick’s ceramics were known for utilitarian and ceremonial presentation pottery
(mostly ceramic pigs) throughout the 18th and 19th centuries. Pottery manufacturing at this time was usually located where the clay and the railroads met, and geologists reported that some of the finest clay for pottery was found in and around Anna. This became a natural
place for pottery. Today the Kirkpatrick’s Anna Pottery pieces have found their way to museums and collectors. With its successful business, the family was wealthy so it could participate in leisure activities such as horseback riding.”

The rest of the Annabelle hydrangea’s story, including its name, comes fifty years later when it was “brought to the attention of J.C. McDaniel, famous plantsman and professor of horticulture. He loved it and set the wheels in motion for it to become a commercial success. Two years later, after some nursery propagation and further investigation, it was introduced to the world. McDaniel first wanted to register the hydrangea as “Ballerina”…but a name was selected to honor the belles of Anna who discovered it.” – WTF fun facts