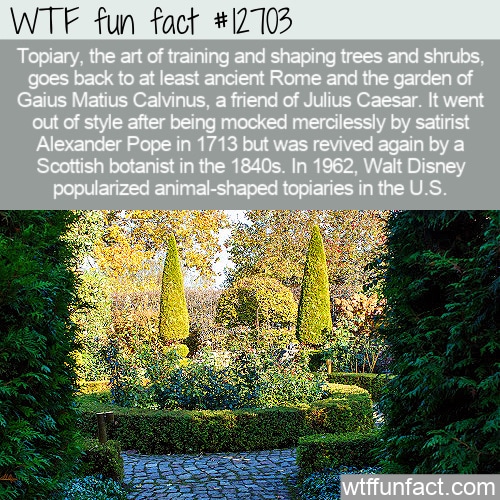 The art of topiary has a long history and going in and out of style. And we’re not exactly sure who made the first shaped and trained tree or shrub or why.

While the word “topiary” is a 16th-century English term, it comes from the Lain topiarius, meaning ornamental gardener. You can find that word in letters from 1st/2nd century CE author Pliny the Younger’s letters. He described the Tuscan villa of Gaius Matius Calvinus as having many animals and other figures made out of cypress. He introduced the art to his friend Julius Caesar.

When the Roman Empire collapsed, no one really had time for topiary (or for ornamental gardens at all) for a couple of hundred years, although the art was largely preserved among monks who manicured their gardens. (Even a manicured hedge is technically a topiary.)

The artistic boom of the Renaissance brought topiary back into favor among those who could afford ornamental gardens and Italian villas were home to everything from topiary animals to giant bushy obelisks and pyramids.

Of course, many of us associate topiary with the French because of the gardens of Versailles, which is still a premier place to view them to this day. But each country had its own way of doing things – some favored large cones, others liked things at smaller scales.

English gardens are also famous for topiaries, but things got a bit out of hand as people became obsessed with more elaborate shapes and sizes.

By the 18th century, topiary was primed for a take-down as being both too trendy and too ridiculous in some of its forms. So when satirist Alexander Pope wrote a widely-read essay called “Verdant Sculpture” in the newspaper in September 1713, it seemed so spot-on that people were soon embarrassed by their elaborate mazes and giant tree animals. By the 1730s, many mansions had their topiaries removed as people decided they were unstylish in light of the mocking.

Of course, people who didn’t care about the trendiest way to garden still had them, but aristocrats didn’t push the art forward for another century and a half.

By the 1870s, the style became popular in England again and remains popular today.

The U.S. caught up to the gardening trend in the 1950s and 60s when Walt Disney decided to introduce topiaries to Disney World in the shape of his cartoon characters. Now topiary was portable as well and could be brought indoors, which coincided with the rise in popularity of the U.S. houseplant.

(And let’s not forget that many of us aged 40 and up remember Edward Scissorhands as the ultimate topiarist!)

Now you can find topiary around the world in all shapes and sizes, and it shows no sign of going out of style any time soon. – WTF fun facts