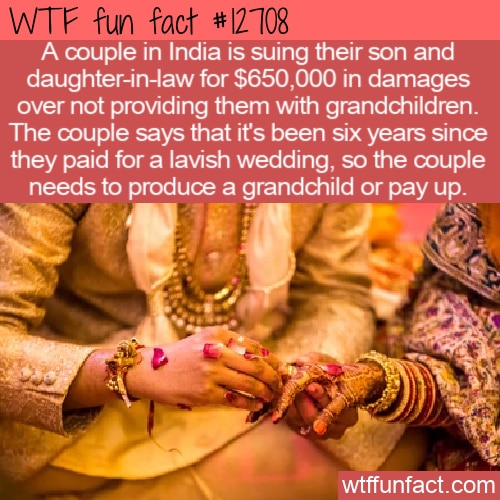 In a story that raised eyebrows around the world, a couple in India is telling their son and daughter-in-law that waiting six years for a grandchild is just too long (or at least long enough).

Sanjeev Ranjan Prasad and Sadhana Prasad paid for an education in the U.S. so their son could become a pilot, bought him a luxury car, and financed his lavish wedding and overseas honeymoon. And now they are looking for payback in the form of a grandchild to dote on.

The couple’s lawyer, Arvind Srivastava, seems to understand: “I feel very sorry for them because I am also an Indian and I can understand their pain,” he said. “This is an Indian parent thing.”

There are probably plenty of prospective grandparents around the world who can sympathize with the disappointment, but it’s the lawsuit (and the accompanying feeling of entitlement) that is…let’s say…puzzling.

They seem to feel that the money was an investment in their own child so they could get something back – in the form of a grandchild. They’ve expressed sadness, embarrassment, and now a bit of litigious rage that the couple seems to have no interest in having a baby after six years. And they seem to think that they are now owed $650,000 for the disappointment and humiliation they have endured.

The deal is that the young couple can now take a year to produce the heir or pay up, and a northern Indian court is overseeing the case (which, according to most legal scholars, will go nowhere).

But regardless of whether or not the case just goes away, it’s raising a debate about what kids owe their parents, legally and spiritually.

According to the NYT: “In the Hindu faith, as in other traditions, children have a duty to repay a moral debt to their parents by taking care of them in their old age. Having grandchildren is also seen as necessary to carry forward a family’s lineage and help one’s parents achieve enlightenment.”

Here’s an interview with the parents involved:

Source: “No Grandchild? Six Years After Son’s Wedding, These Parents Are Suing” — The New York Times