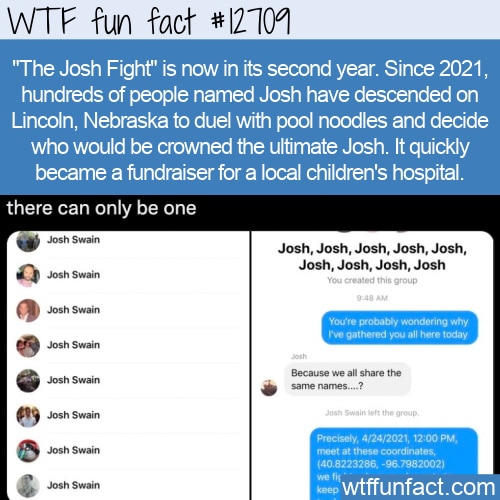 It all started with a guy named Josh Swain who found a bunch of other Josh Swains on social media. Then it grew to encompass all Joshes. Now, anyone with a pool noodle and a good sense of humor can show up.

The Josh Fight is a now-annual event held in Lincoln, Nebraska (since that’s where the coordinates that the first Josh randomly picked out led people). The whole city is now in on the fun and the second annual The Josh Fight in 2022 had food trucks, games, and the traditional pool noodle fight. (Only soft, flexible pool noodles are allowed.)

Instead of getting out of hand in a bad way, the Joshes of the world really stepped up, crowning 5-year-old Josh Vinson Jr. as the Ultimate Josh. He returned to successfully defend his title.

According to Complex: “The event isn’t just for fun. With the pool noodle fight, the group raised almost $21K for Omaha’s Children’s Hospital and Medical Center. Some of those funds will be given to the Joshua Collinsworth Memorial Foundation. The Josh Cellars wine label also said it will match the same funds.”

Source: “Hundreds of People Named Josh Once Again Gathered in Nebraska for Pool Noodle Fight to Select the No. 1 Josh” — Complex