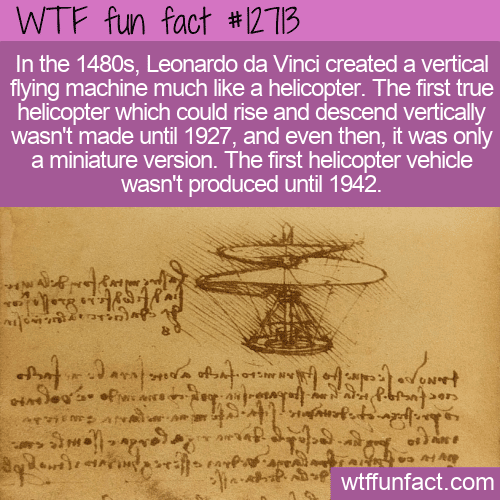 It’s hard to put into words the genius of Leonardo da Vinci. You have to look beyond his paintings and into his notebooks to see just how masterfully his brain worked. It’s like he understood the secrets of nature in a way no one else could (either then or now).

For example, in the 1480s, he was already imagining ways to create flying machines. And some might call his “aerial screw” the forerunner of the helicopter. That’s an innovation that it took us 400 more years to actually create!

(It’s only fair to mention that de Vinci’s drawing is not the first-ever of a helicopter-type vehicle. In 400 BCE, Chinese Taoist scholar Ge Hong described a “vertical flying machine” made of bamboo in the Baopuzi, though he was referring to a spinning toy. And since Chinese manuscripts made their way to Europe during the Renaissance, da Vinci was possibly influenced by this. It certainly influenced future helicopter inventors.)

Today, we even call the Renaissance artist’s invention “da Vinci’s helicopter” these days, and he wrote an entire treatise on flight. Just look at a page to see what he was capable of:

In the modern world, companies still bicker over who invented the first real helicopter, so it’s just more fun to give credit to da Vinci.

Of course, the aerial screw isn’t the same helicopter we have today. It’s not like he built a gas engine or anything, but he did conceive of a blade that would lift a vehicle vertically off the ground. His blades were not flat but shaped like a screw or helix.

“What da Vinci lacked was the modern materials necessary to construct a lightweight and durable blade. He described the helical screw as being made of linen, with the pores stopped up by starch.

He also lacked the continuous motive power for such a machine. Men turning cranks could never dream of flying: they are far too heavy and too weak to produce enough power to lift themselves…Cognizant of this limitation, da Vinci envisioned a spring, wound by the crank turners, building up and storing energy. That built-up energy could be released in a quick unwinding burst, spinning the screw rotor. But as far as we know, such a device was never built.”  — WTF fun facts