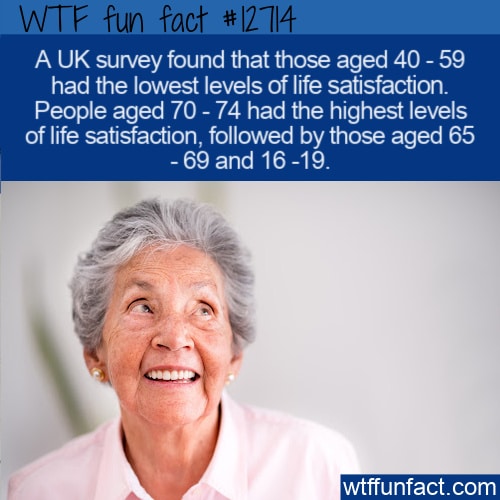 Of course, that doesn’t mean it’s true for everyone – some of us think of our 40s and 50s as a wonderful time when our careers flourish. But overall, that age group reports the lower levels of life satisfaction and the highest levels of anxiety. And while anxiety is higher in women, they tend to report more life satisfaction than men.

According to The Guardian’s report on the survey, “life satisfaction plummeted among respondents aged 35 and over.” This may be due to increased family responsibilities and less time to let loose and have fun.

Researchers stated that “Evidence shows that people are having children later. Therefore, another possible reason for lower scores for the middle-age groups could result from the burden caused by having to care for both parents and children at the same time”

If you are middle-aged and miserable, however, there is a bright spot. Once you hit 60, it’s largely uphill for life satisfaction. People aged 65-79 had the highest levels of personal wellbeing (peaking at ages 70 to 74).

Now, it may be a generational thing as well. Or perhaps with age comes wisdom and the realization that one can choose happiness. We just don’t know for sure.

The important thing to note is that if you feel unduly stressed in your 40s and 50s, you’re pretty much normal – and it does get better. However, ages 50 to 54 may be the worst years. — WTF fun facts

Source: “People aged 40-59 are least happy and most anxious, report finds” — The Guardian