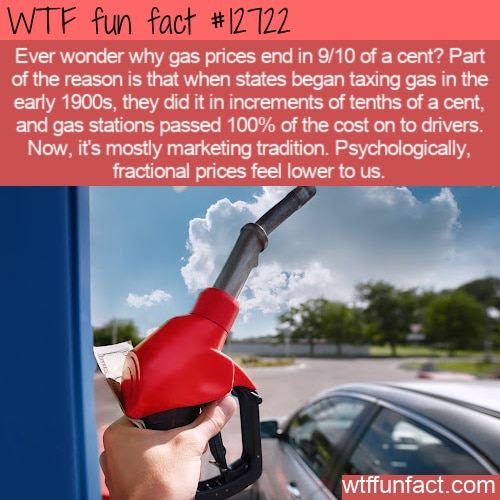 Yes, we know. When gas prices are over $5/gallon for even the cheap stuff, no one wants to talk about gas prices.

But chances are you’ve stared a little harder than usual at the prices on the signs lately. And if you’re observant, you’ve probably noticed that more often than not, those prices end in 9/10 cents.

Part of the reason is historical. In the early 20th century when states began taking gas to help pay for highway repair, they did it in increments of a tenth of a cent. That entire cost got added on to gas prices and passed along to drivers. But when gas was 9/10th of a cent back in the day, rounding up would have been a huge 10% hike.

Today, rounding up would hardly even register to most of us, but the pricing is part tradition and part marketing.

Nearly all prices are rounded down to the previous dollar (except for luxury goods, where paying a premium is no big deal). Think about how many prices end in 99 cents. It’s purse psychology.

Marketers study human psychology in order to understand what will make us buy things. And it turns out that we are far more likely to buy something that is $9.99 rather than $10. Our brains process that as real savings (because we’re paying in the nine-dollar range instead of the ten-dollar range).

It’s called “just-below pricing,” and it’s used everywhere. And it’s so effective that even the news doesn’t necessarily pick up a story on gas prices until they hit a new full dollar mark.