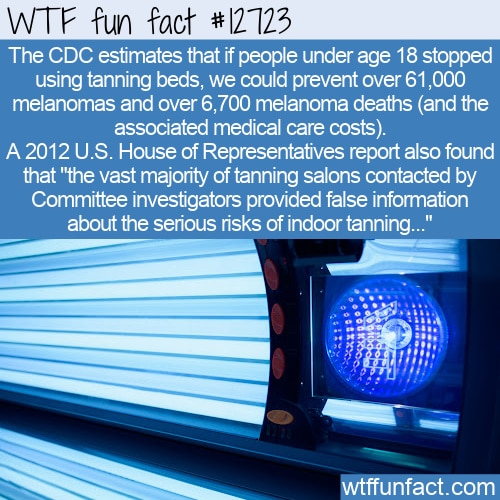 It’s been decades since we’ve known that tanning beds cause cancer and yet some folks just can’t get enough. It doesn’t help that the tanning industry continues to tout the benefits despite copious scientific evidence that they’re unsafe at best (and, at worst, deadly).

Of course, sun exposure is damaging too, but some of us can’t avoid that – you actually have to walk in and pay for skin damage at a tanning salon dispute there being no physiological benefit (for example, there’s no such thing as a “healthy base tan”).

In addition, a study published in JAMA Internal Medicine estimated that more than 3,200 people are treated for tanning-related injuries in US emergency rooms every year.

It’s hard to hear for many people as “tanning addition” becomes more of a problem, especially among young, white women.

But here are just a few facts from the American Academy of Dermatology Association to provide food for thought:

And, finally, a Forbes article laid out the issues with indoor tanning as well as some research that shows our desire to tan may actually be influenced by genetics! — WTF fun facts