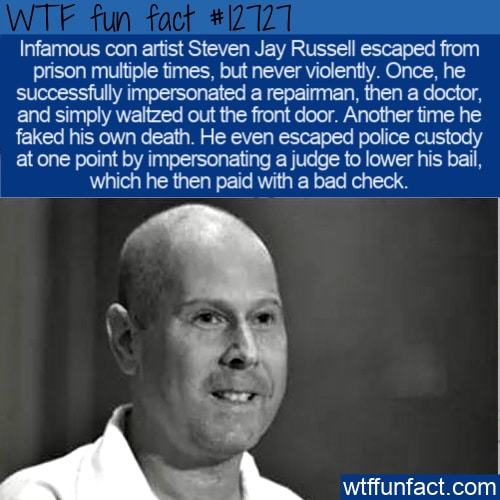 Steven Jay Russell has had 14 aliases, but the conman will always be remembered by his real name because, despite all his cons, he has always been caught. Oh, and they made a movie about him!

Russell also has some nicknames, such as “King Con” or perhaps the more apt “Houdini,” since he seems to slip out of jail quite often. Four times to be exact (although, to be fair, once it was from a hospital while he was in police custody).

He’s currently serving his 144-year jail sentence for a litany of non-violent charges, including felony escape and embezzlement.

His life of crime began in 1992 when he was being held at Harris County Jail in Houston for making a false insurance claim that said he injured his back. Disguising himself as a repairman, he got access to a walkie-talkie, which he used to simply waltz right out the front door, despite it being guarded.

When he was caught, he was sent to a Texas prison where he met his long-time love, Phillip Morris. When the pair was released (Russell was released on parole), Russell wanted to give his partner a lavish lifestyle. That’s when he managed to get himself a job as the chief financial officer at a medical insurance company.

Over the next five months, he managed to embezzle them out of $800,000, which he spent on cars, Rolexes, and even some cosmetic surgery. Then he was caught.

This time, Russell escaped from police custody instead of jail (so, technically, he has 5 escapes under his belt). He impersonated a judge over the phone, asking that his bail be reduced from $900k to just $45k. It worked – and Russell paid the less bail with a check. Of course, the check bounced. He was caught when trying to get back in touch with Morris.

The Guardian explained his third escape after interviewing him:

“Three years later, he stockpiled green felt-tip pens from prison art classes, squeezing the ink from the cartridges into a sink of water and dying his overalls the colour of surgical gowns. ‘You have to be very careful because if you wring them out, you get streaks in the material,’ he says matter-of-factly. Underneath the makeshift medical clothes, Russell taped several plastic bags tightly to his body so that police dogs would not be able to follow his scent once he was on the run. He picked a moment when the woman manning the front desk was on the telephone and then, unquestioned by prison staff, simply walked out ‘dressed like Dr Kildare.'”

The fourth escape occurred on March 20, 1998 (a Friday the 13th – in fact, all of Russell’s escapes took place on Friday the 13th!). Russell posed as a millionaire from Virginia to get a $75,000 loan from Dallas’ NationsBank. But bank officials were on to him and alerted the police.

When the police apprehended him, Russell faked a heart attack. In the hospital, he managed to impersonate an FBI agent on the phone to tell the hospital to release him.

Each time, he and Morris were tracked down. Ninety-nine years of his 144-year sentence is for the escapes.

Today, Steven Jay Russell is currently serving his sentence in solitary confinement for 23 hours a day (to give you some perspective on that, the United Nations has deemed it torture to hold people in solitary for more than 15 days without meaningful human contact).

With a release date of 2140, many people have called his sentence excessive and have asked Texas to release him (he became eligible for parole in 2020, but that doesn’t mean you automatically get granted a hearing). People who support his release (or a shorter sentence or release from solitary point out that there are cold-blooded murderers who received much shorter sentences. None of Russell’s crimes or escapes involved the use of violence or force of any kind.

Source: “I love you Phillip Morris: a conman’s story” — The Guardian