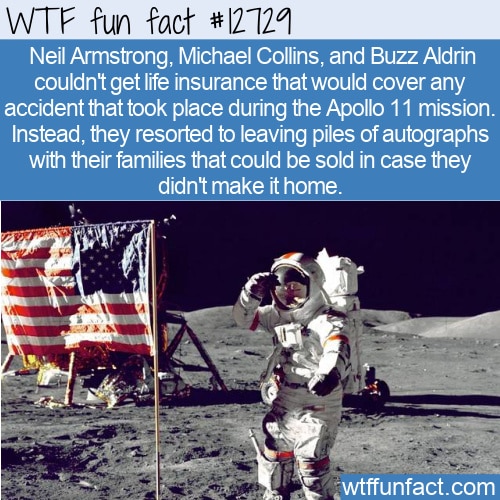 We never really thought about astronaut life insurance, but we had hoped that heroic explorers wouldn’t have to worry about their families being taken care of in the event of their untimely demise.

Alas, that was not necessarily the case for Apollo 11 astronauts Neil Armstrong, Michael Collins, and Buzz Aldrin. They didn’t have life insurance that covered an accident involving a moon landing (or anything related to it).

“It was driven by the fact that, given the nature of the astronauts’ livelihood, they were not able to secure much life insurance,” said Apollo program author Howard C. Weinberger. According to Brandi Dean, spokesperson for NASA’s Johnson Space Center, NASA DID have an insurance program, but it “originally did not cover astronauts when flying—it was considered high risk and experimental.”

There may not have been an eBay marketplace back in 1969, but Neil Armstrong understood the power of celebrity and the value of an autograph. That’s why he suggested they all leave autographed materials behind for their families to sell in case they didn’t return.

Particularly valuable were items called covers, which are envelopes signed and postmarked on important dates.

“About a month before Apollo 11 was set to launch, the three astronauts entered quarantine. And, during free moments in the following weeks, each of the astronauts signed hundreds of covers.

While the trio didn’t need to worry about a grim fate after all, the items did start showing up at auctions in the 1990s. An Apollo 11 “insurance autograph” was worth up to $30,000 at the time.  – WTF fun facts

Source: “What The Apollo Astronauts Did For Life Insurance” — NPR