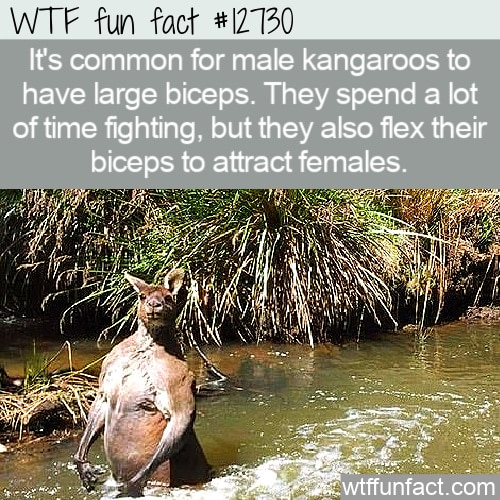 Male kangaroos and male humans have something in common – they flex their biceps to impress females. Researchers showed that male western grey kangaroos use their biceps both for combat and to compete for the ladies.

The Conversation interviewed kangaroo expert Rod Wells, who said that bigger biceps might mean an “additional advantage from either females finding big forelimbs sexy or alternatively the males which win the right to access the females are then strong enough to overpower any unwilling female.”

We’re not impressed by that last part.

Kangaroos have long been a symbol of strength. According to Smithsonian Magazine: “The Royal Australian Air Force used a boxing kangaroo starting in 1891. For a while, kangaroos would fight men in boxing rings. And, in fact, a male kangaroo biceps are a lot more impressive than you might think.”

Fighting and flexing kangaroos are a new concept to some of us. For example, in 2017, an Australian snapped a photo of a particularly jacked kangaroo he came across while taking his dog for a walk. While its musculature is not super common, it brought attention to the fact that kangaroos can get ripped.

According to Men’s Health: “Jackson Vincent, a 27-year-old gardener in Australia, was walking his dog Dharma on his grandmother’s property near Boodjidup Creek when he spotted the massive ‘roo. He said he’s seen kangaroos on the land since he was a kid, but few that have been that large, according to the Sun. The ‘roo was standing in the creek nearly fully submerged, and as Vincent started to take photos, it started to come at him.”

While we’re smart enough not to approach a wild animal we don’t know much about, we plan to be extra careful with kangaroos from now on. If you’re not convinced, you may want to check out the video below and watch them kick each other’s butts – it’s quite a sight!

Source: “It’s Not Just Men Who Flex Their Biceps at Women—Kangaroos Do, Too” — Smithsonian Magazine