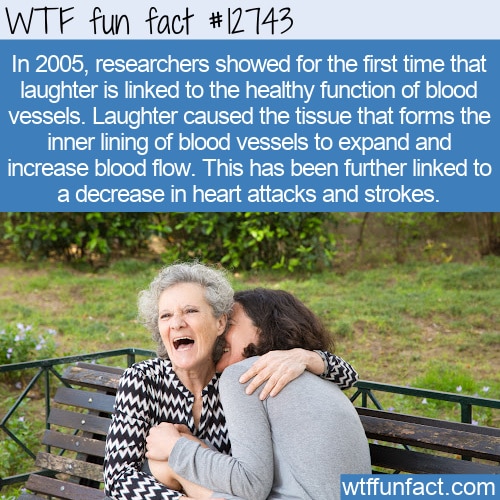 We’ve always had lots of anecdotal evidence that “laughter is the best medicine” and studies have shown correlations between laughter and happiness and laughter and better life satisfaction. But in 2005, the first study showed some of the physiological effects laughter has on the body’s cardiovascular system.

So when you say “laughter is the best medicine” to someone and they roll their eyes, you can now hit them with some facts (unless you’re at a funeral or something, then wait a few weeks, please).

The results of the study were first presented at the Scientific Session of the American College of Cardiology, on March 7, 2005 by researchers from the University of Maryland. It kicked off a whole slew of studies backing up the evidence and providing yet more clues that you can laugh your way into old age.

But first, let’s see how this works. The first study used movies to look at the immediate effects of laughter on subjects’ endothelium – the tissue that forms the inner lining of blood vessels and that dilates or expands during blood flow. (And if it’s been a while since you’ve had a biology class, the better blood flows around your body – and to your heart – the more oxygen and other vital molecules get where they need to be.)

There were two groups of subjects – one watched a movie clip known to cause mental distress (for example, scenes from Saving Private Ryan – a great film, but not exactly a “cinematic joy ride,” aka it’s sad). The other group watched scenes from funny movies (one example was King Pin, which we have never seen, but we’ll trust that the researchers found a good clip).

Ok, so the goal was really just to make one group laugh and the other get kind of mired in sadness and then measure their blood flow. And you can probably see where this is going.

The distressed group’s blood vessels showed an unhealthy physiological response of the blood vessels called vasoconstriction (a narrowing of the vessels that impedes blood flow). That had been suggested by many other studies before – when we’re stressed, our blood vessels constrict. Not good.

On the other hand, those who laughed showed great blood flow. That’s good. But it’s not just good in the moment, it’s good in the long term because the endothelium helps tone our blood vessels, adjust coagulation rates, and secretes chemicals that help heal wounds and respond to infections.

In an interview about the study, the lead investigator Michael Miller, M.D., director of preventive cardiology at the University of Maryland Medical Center said: “The endothelium is the first line in the development of atherosclerosis or hardening of the arteries, so, given the results of our study, it is conceivable that laughing may be important to maintain a healthy endothelium, and reduce the risk of cardiovascular disease. At the very least, laughter offsets the impact of mental stress, which is harmful to the endothelium.”

The impact of laughter was so strong that they compared it to the benefits one may get from exercise (thought warned against trying to replace exercise with laughter).

“The magnitude of change we saw in the endothelium is similar to the benefit we might see with aerobic activity, but without the aches, pains and muscle tension associated with exercise,” Miller said. “We don’t recommend that you laugh and not exercise, but we do recommend that you try to laugh on a regular basis. Thirty minutes of exercise three times a week, and 15 minutes of laughter on a daily basis is probably good for the vascular system.”

Since 2005, there have been many studies that show laughter is good for health, including:

So, ask your doctor today about what a funny movie or a night out with fun friends can do for you. And if they look at you funny, just tell them you read that laughter is the best medicine on the internet. They love hearing that. – WTF fun facts