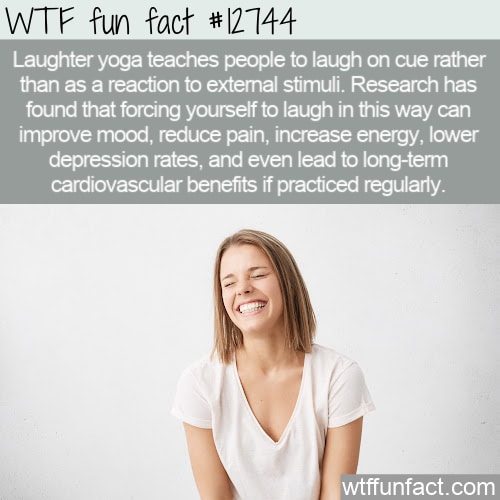 Laughter yoga was first introduced by Dr. Madan Kataria, a physician in Mumbai, India, in 1995. Using research that showed laughter can have beneficial effects on physical and mental health.

Since it was introduced, it has spread all over the world and has been shown to help improve mood through the release of serotonin and dopamine, improve cardiovascular function by improving blood flow to the heart, and reduce stress by suppressing cortisol levels.

Better yet, it’s free and doesn’t require anything but feeling a little bit silly.

What is laughter yoga?

You can do laughter yoga on your own, but doing it in a group setting (even via Zoom) has been shown to have further beneficial effects as it increases feelings of belonging and reduces loneliness.

According to Healthline (cited below): “Most sessions begin with simple breathing techniques, clapping, and chanting to help people relax. For example, you may begin the class by clapping rhythmically 1-2, 1-2-3 while chanting ‘ho-ho, ha-ha-ha.'”

We tried it. It does feel totally ridiculous at first. But eventually (and especially if you’re in a group), the fake laughter leads to real laughter. And your body doesn’t seem to know the difference anyway. Nothing actually has to be funny for you to get the mental and physical benefits that laughter brings.

Studies on the health effects

In addition, Healthline cited many studies pointing to proof of the benefits of laughter yoga:

Other studies have shown that laughing yoga may help temporarily reduce cortisol levels and stress, improve mood and energy levels, and induce a more positive mindset. In fact, it may be as effective as aerobic exercise at reducing self-reported stress (Source 2, Source 3, Source 4, Source 5, Source 6).”

Despite all the research, more large-scale studies need to be done to confirm the benefits. But in the meantime, a little laughter yoga probably wouldn’t hurt!

Check out the video below to see how you can get started. – WTF fun facts

Source: “Laughing Yoga: What Is It and Does It Work?” — Laughter Yoga