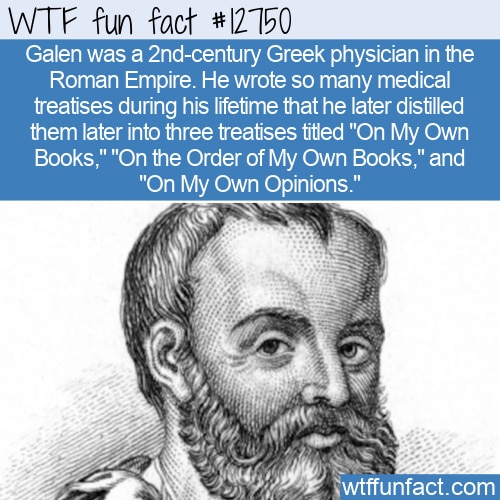 Galen of Pergamon was a Greek physician working in the Roman Empire in the second century AD. It’s believed he wrote hundreds of treatises. He was a well-known figure in his own time who treated politicians (including Roman emperor Marcus Aurelius) and gladiators alike.

Galen wrote so many medical treatises during his lifetime that had to distill them later on into at least three treatises. He titled these: “On My Own Books,” “On the Order of My Own Books,” and “On My Own Opinions” (the latter only survives in fragments).

He wrote about anatomy and physiology, ethics, pharmacy, medical instruments, hygiene, and even the philosophy of medicine. Much of his work was based on the Hippocratic Corpus. However, he took issue with many of the ideas in those ancient Greek works.

By writing the organizing treatises, Galen meant to set out a curriculum for aspiring doctors. This would allow them to understand the order in which to read his books and what larger philosophical points to take away from each.

Galen outside of medicine

Galen was so prolific that he even wrote on subjects that typically lie outside medicine, such as linguistics. But many of those works are lost and we only know about them via references in other treatises.

Galen is also considered an ancient philosopher and engaged with matter of logic and the texts of Aristotle, Plato, and the Stoics.

Despite all of his medical experimentation and the scientific nature of his writing, he also claimed to have knowledge of medicine thanks to the ancient Greek healing god Asclepius. He also believed that the human body was such a perfect and divine machine that it was certainly created by a greater being. However, he does not engage directly with other metaphysical questions about what else that god might believe or dictate about the world.