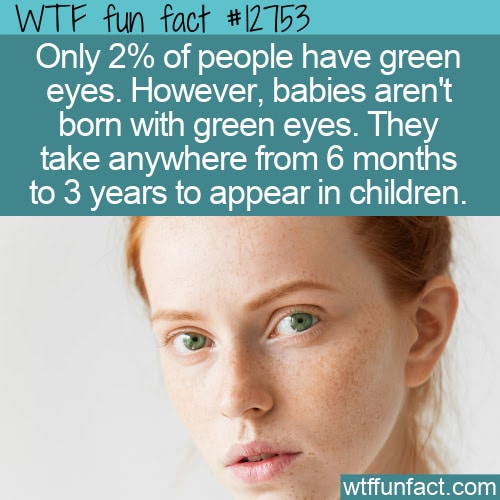 We knew green eyes were rare, but they seem even more special knowing that only 2% of people in the world have them.

But if your friend tells you their newborn has green eyes, they’re clearly seeing something different. All babies are born with some shade of brown or blue eyes. As their eyes are exposed to more light over time, their eye color begins to change into what their own unique genetics dictates. But this can take up to three years!

It may be no surprise that most people with green eyes can be found in Ireland, Scotland, and Northern Europe (or they’re descendants of people from that area). The red hair-green eye combo is pretty classic. However, anyone can technically have green eyes, including people who are Black, Arabic, Hispanic/Latino, etc.

The myth of the Punnett square

Another interesting thing about eye color is that it’s not as simple as we learned in high school biology (remember Punnett squares?!). Genetics plays a role, but the contribution of different genes to our melanin cells (the cells that give our skin and eyes their pigment) is more complicated than we were taught. So don’t break out the paternity test as soon as you see an unexpected eye color. Even two parents with blue eyes can have a brown-eyed child!

Eye color is actually a polygenic trait (whereas Punnett squares would have had us believe it just took two genes and no more).

People with blue eyes have genes that produce the fewest melanin cells. Green-eyed people have more melanin in their eyes than blue-eyed people. But it’s the combination of that along with the presence of a yellow pigment called lipochrome that makes eyes appear green. – WTF fun facts