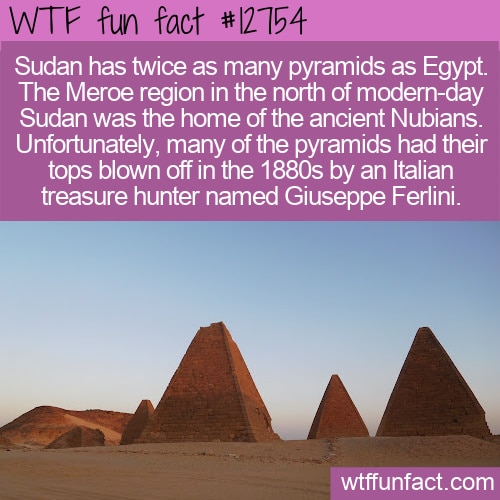 Interested in ancient civilizations? Want to see pyramids without all the tourists? Then you may want to consider visiting the Meroe region in Sudan. In Sudan, pyramids outnumber the Egyptian kind by nearly 2:1.

The pyramids belong to the ancient Nubian kings, who lived in the northern part of present-day Sudan. Meroe was the capital city of the Kingdom of Kush. The structures themselves are nearly 5000 years old and are largely untouched these days.

The main source of destruction to the pyramids was an Italian “explorer” named Giuseppe Ferlini. He blew up quite a few and destroyed the tops of many structures in his hunt for the kings’ treasures in the 1880s.

These little-known Nubian tombs have paintings on the inside celebrating the kings buried inside. And since the Nubians did business with other ancient civilizations, you can see Greek and Roman, influences in the artwork.

Since the Kushite kingdom is part of the Nile River Valley, the most prominent influence is that of the Egyptians. (Of course, Egypt’s pyramids are much older, dating back to the era of the New Kingdom from the 16th century BC to the 11th century BC).

Of course, many of the tombs were raided by Ferlini during his destructive episode, and the “loot” now resides in many European museums. But they had been plundered in ancient times as well.

Luckily, the Nubian pyramids are now a UNESCO World Heritage Site and are generally protected from more harm. Until 2019, National Geographic funded further excavations of the site to learn more about the ancient kings and their civilization.

Much of the excavations require researchers to dive underwater to enter the structures.

According to NatGeo, “The largest and oldest pyramid at Nuri belongs to its most famous resident: the pharaoh Taharqa, a Kushite king who in the seventh century B.C. rallied his troops to the northern edges of his empire to defend Jerusalem from the Assyrians, earning him a mention in the Old Testament.” – WTF fun facts