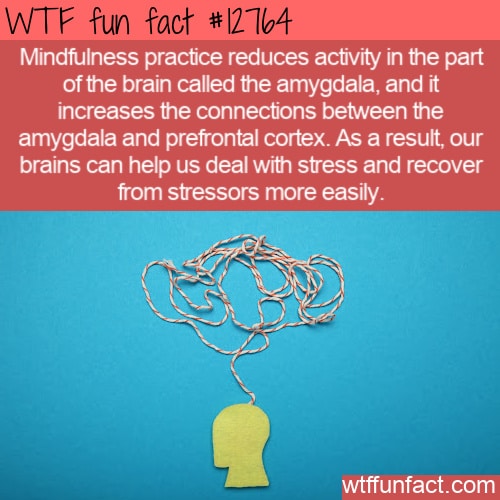 Mindfulness practice encourages people to stop and spend time noticing their thoughts and then letting go of the ones that are negative, disorganized, or aren’t serving a positive purpose. It’s designed to help us notice and control our thinking. (As opposed to most meditation practices, which center around emptying the mind of thoughts.)

The part of the brain affected by mindfulness practice is called the amygdala. This is also called the “fight or flight” center because it is linked to fear and emotional responses. Brain scans have shown that mindfulness practice helps shrink the amygdala. While that may sound like a bad thing, an overactive amygdala can be bad for concentration, mood, and emotional regulation.

However, mindfulness has been shown to help increase the connections between the amygdala and prefrontal cortex. That’s a good thing because those connections help us regulate our emotional responses.

We need our amygdala, we just don’t want it to be hyperactive. And when we practice mindfulness, our bodies get better at regulating those emotional responses.

While some of the effects of mindfulness have been overstated in the press, there is evidence that it can modestly increase physical health and compassion and even reduce bias in addition to negative thought patterns.

The popularity of mindfulness meditation

A U.S. survey found that the percentage of adults practicing some type of mantra-based meditation, mindfulness meditation, or spiritual meditation in the previous year tripled between 2012 and 2017 (from 4.1% to 14.2%). Even among children (4 to 17 years of age), the percentage increased from less than 1% to over 5%. These emotional regulation techniques continue to grow in popularity.

Of course, there’s a lot we still don’t know about mindfulness and meditation in general, and they’re not always the best practices for everyone.

There are also different types of mindfulness meditation to practice, each with slightly different outcomes. For example, body scanning can help reduce negative thoughts. But practices in which participants are asked to observe their thoughts can sometimes lead to more negative thinking, especially among those who have just started practicing the skill and can’t let go of those thoughts easily.

In the end, it may be best for those who are new to mindfulness and observing their thoughts to do so with guidance from a teacher or tool so that they can stay on the right track and get the most out of their mindfulness practices. – WTF fun facts

Source: “10 Things We Know About the Science of Meditation” — Mindful