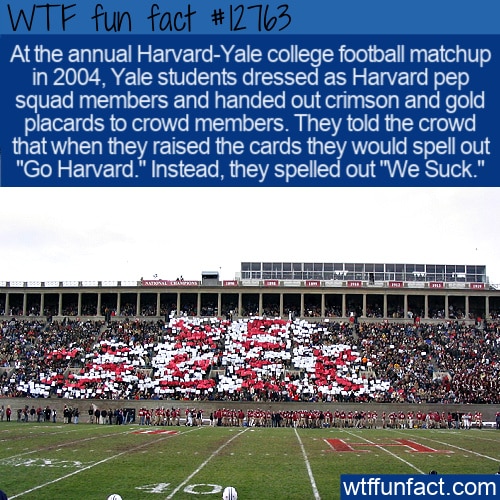 Every year, Ivy League universities Harvard University and Yale University meet up in a college football matchup that only alumni could possibly care about. (Yale has been bad for over a century, while Harvard has had a few eye-raising moments in the last few decades, but not enough to be a contender in the wider world of college football.)

The game is all about the rivalry, so pranks are fairly common. But a November 20, 2004 prank was at least good enough to make the evening sports news and go down as an embarrassment for Harvard.

Who carried out the Harvard – Yale prank?

Two Yale students from the class of ’05 named Michael Kai and David Aulicino gathered about 20 classmates to carry out the prank. The students dressed as members of the Harvard pep squad and handed out placards to the middle sideline section of Harvard fans. The idea was that when everyone held up the placards at the same time, it would spell out “Go Harvard.” At least that’s what the fans were told.

Impressively, they managed to hand out 1800 squares of paper, so it would have been hard for anyone to know what it was about to say (people only had small parts of letters).

Trolling their own team

Of course, now we know those placards didn’t spell out “Go Harvard.”

Instead, they spelled out “We Suck.”

The section was mostly full of alumni (which somehow makes it even funnier). The student section was off to the side, so the Harvard students couldn’t quite see it – and they later denied it even happened (despite the photo).

But Yale fans and players could see it, and so could that Harvard football team.

Prankster Dylan Davey didn’t feel bad about hoodwinking the alumni. According to the Yale Daily News (cited below):

“It was almost sad,” said Davey. “There were all these grandfather and grandmother types — and they all had big smiles, saying, ‘Oh you’re so cute, I’m so glad you’re doing this.’ I felt bad for about two minutes. Then I got over it.”