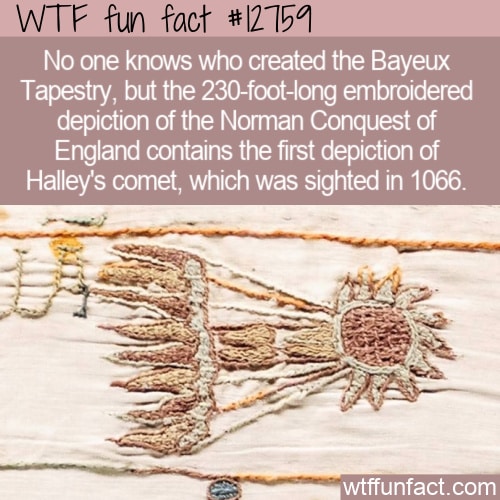 No one knows the exact origins of the Bayeux Tapestry. Our best guess is that it was commissioned in the 1070s, even though the first written reference to it wasn’t until 1476.

Hundreds of years later, this famous piece of medieval art was described in a cathedral treasury as “a very long and narrow hanging on which are embroidered figures and inscriptions comprising a representation of the conquest of England.”

And that’s precisely what it is. And when they say “very long,” they mean it’s over 200 feet long. That’s a lot of embroidering.

Historians believe the tapestry was commissioned by Bishop Odo of Bayeux, who was the half-brother of William the Conqueror. Some say it was created in Kent, England even though it eventually made its way to Bayeux, which is in Normandy, France. That’s where you can still find it today (though there’s a painstakingly-made replica at the British Museum.)

Britannica (cited below) describes the scenes: “The story begins with a prelude to Harold’s visit to Bosham on his way to Normandy (1064?) and ends with the flight of Harold’s English forces from Hastings (October 1066); originally, the story may have been taken further, but the end of the strip has perished. Along the top and the bottom run decorative borders with figures of animals, scenes from the fables of Aesop and Phaedrus, scenes from husbandry and the chase, and occasionally scenes related to the main pictorial narrative.”

The tapestry is considered a historical document. And we should be glad it’s safe – it has escaped destruction many times. According to Britannica:

“When first referred to (1476), the tapestry was used once a year to decorate the nave of the cathedral in Bayeux, France. There it was “discovered” by the French antiquarian and scholar Bernard de Montfaucon, who published the earliest complete reproduction of it in 1730. Having twice narrowly escaped destruction during the French Revolution, it was exhibited in Paris at Napoleon’s wish in 1803–04 and thereafter was in civil custody at Bayeux, except in 1871 (during the Franco-German War) and from September 1939 to March 1945 (during World War II).”

The Bayeux Tapestry is also the first depiction of Halley’s comet as well, which we know appeared in 1066 during the Norman Conquest. According to the Anglo-Saxon Chronicle, as William the Conqueror left for England, “a portent such as men had never seen before was seen in the heavens.”

It was considered bad luck at the time for the English King Harold II, who was defeated at the Battle of Hastings. – WTF fun facts