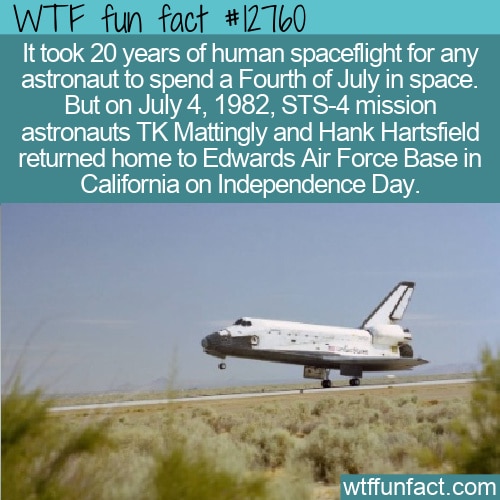 A 4th of July in space is certainly one to remember.

But space isn’t the first place we’d think of as an ideal place to celebrate America’s independence day. After all, the good hot dogs are down on Earth.

STS-4 mission astronauts TK Mattingly and Hank Hartsfield were the first astronauts to do it. It took 20 years of space flight for astronauts to be there on that day. Now, with the International Space Station almost always occupied, it’s quite common.

According to NASA (cited below): “That all changed with the STS-4 mission. On July 4, 1982, on the final day of their mission, astronauts Thomas K. ‘TK’ Mattingly and Henry W. “Hank” Hartsfield guided space shuttle Columbia to its first concrete runway landing at Edwards Air Force Base in California. President Ronald W. Reagan, who two years later instructed NASA to develop a space station, and First Lady Nancy Reagan greeted Mattingly and Hartsfield as they disembarked from Columbia. Shortly thereafter, the President led a celebration in front of space shuttle Enterprise, saying, “TK and Hank, you’ve just given the American people a Fourth of July present to remember.“ To cap off the event attended by 45,000 people and broadcast on television, President Reagan gave the signal for the Shuttle Carrier Aircraft carrying Challenger, NASA’s newest space shuttle orbiter, to take off to begin its transcontinental ferry flight to NASA’s Kennedy Space Center (KSC) in Florida.”

After that, Independence Day in space became more common.

NASA described future July 4th space flights: “Ten years passed before another crew celebrated the Fourth of July holiday in space. The seven astronauts of STS-50 had completed about half of their 14-day USML-1 mission on July 4, 1992, but the busy pace of the science flight allowed little time for celebrations. Three years later, 10 people orbited the Earth during the historic STS-71 first shuttle docking mission to the Mir space station. In fact, on July 4, 1995, space shuttle Atlantis undocked from Mir, returning NASA astronaut Norman E. Thagard and his two Russian cosmonaut colleagues from a three-month mission aboard Mir. By coincidence, for shuttle crew members Bonnie J. Dunbar and Ellen S. Baker, this marked their second Fourth of July in space as they both served on the STS-50 crew three years earlier. The day’s undocking activities left little time for celebrating, although Mission Control played “America the Beautiful” as the wake-up song that morning. To satisfy Thagard’s request, following their landing at KSC, ground teams treated him and his colleagues to some belated Fourth of July fare of hot dogs, hamburgers, and hot fudge sundaes.” – WTF fun facts