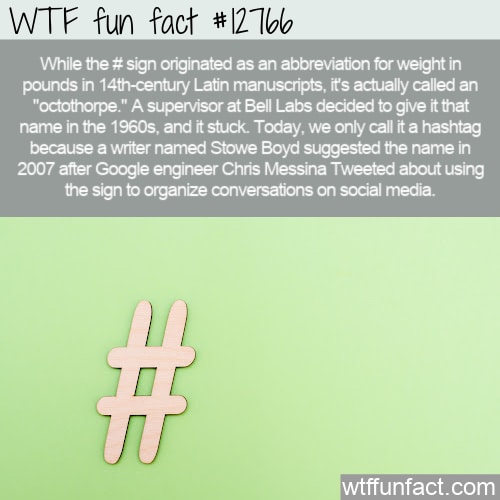 It’s not a word we had ever heard before, but it’s no surprise that signs we use quite frequently for many different purposes actually have proper original names.

According to Mental Floss, the sign originates in 14th-century Latin manuscripts when monks used it to abbreviate libra pondo (or the Latin term for weight in pounds). That would have been lb (like we use today), however “At the time, it was common to add a horizontal bar to abbreviations, known as a tittle, to show that the two letters were connected, and that the letter “l” was not the numeral 1.”

But as scribes began to write faster, the lb with a dash through the l began to look more like a # (in other words, a pound sign).

No doubt a lot happened in between those Latin manuscripts and the # appearing on typewriter keyboards, but we haven’t found any proper explanation of how that happened.

However, when AT&T made its first phone keypads, it wanted them to be a perfect square. That would mean adding two more buttons. They chose * and # because they were already common on typewriters.

But when did the pound sign turn into an octothorpe? When an employee at Bell Labs decided to make up a name for the sign.

The thought process went like this, according to Google engineer Chris Messina’s history of the word:

The birth of the hashtag

Ok, so why and when did we start calling # a hashtag?

According to CBS News, it started with a Tweet.

“It all started back on Aug. 23, 2007 with a tweet by San Francisco techie and former Google developer Chris Messina. He wrote on Twitter, “How do you feel about using # (pound) for groups. As in #barcamp [msg]?”

People didn’t like the idea, but that clearly didn’t stop it from catching on.

Then, a few days later, another user named Stowe Boyd suggested the # symbol be called a hashtag.

And the rest, as they say, is #history.

Source: “Where Does the Hashtag (a.k.a. Octothorpe) Come From?” — Mental Floss
“The Real Source of The Word “Octothorpe” — Chris Messina, Medium