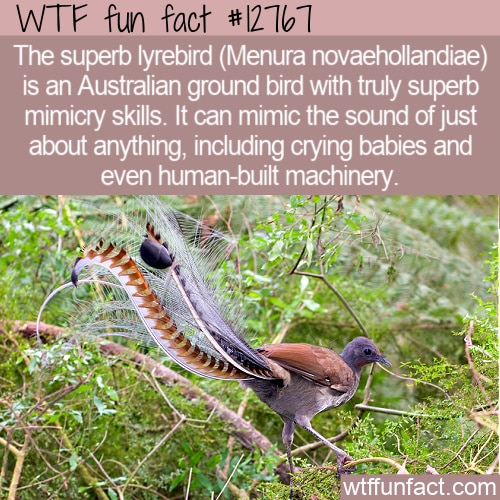 There are actually two types of lyrebirds, both live in Australia, and both are fabulous mimics. We just think the superb lyrebird has a better name. The other one is called Albert’s lyrebird and it’s a little less showy (but equally capable of mimicry).

The superb lyrebird belongs to the genus Menura (family Menuridae, order Passeriformes, if you like to get truly taxonomic). The birds live in the forests of southeastern Australia and do not fly – they are groundbirds.

For the most part, they’re not so impressive to look at. They look a lot like brown chickens. Well, except for the male superb lyrebird – he has to show off to attract females.

According to Britannica (cited below), “the male’s tail consists of eight pairs of ornate feathers, which resemble a lyre when erect. There are six pairs of filmy whitish feathers. One pair of 60–75-cm (24–30-inch) feathers that form the arms of the ‘lyre’ are broad and curled at the tip and are silvery on one side and marked with golden-brown crescents on the other. There are also two equally long ‘wires,’ narrow, stiff, slightly curved feathers that correspond to a lyre’s strings; they are situated in the centre of the curved ‘arms’…When the male displays in small clearings, which he makes at several places in the forest, he brings his tail forward so that the white plumes form a canopy over his head and the lyrelike feathers stand out to the side.”

Here’s our favorite part of Britannica’s description: “In this position he sings, while prancing in rhythm, far-carrying melodious notes interspersed with perfect mimicry of other creatures and even of mechanical sounds.”

You might not think much of that at first, but the fact that a bird can mimic just about any sound is not only impressive but potentially creepy. Imagine walking through the deep forest in Australia (known for all manner of amazing-yet-terrifying creatures) only to hear the sound of a predator, a crying child, or a chainsaw!

We’d be freaked out, to say the least.

Seriously, listen to this bird mimic a baby crying!

Ok, now listen to construction noise (we had to double-check to make sure it was real):

Next time you head construction in the outback, look closer to the ground if you don’t see any men with tools. It may just be a lyrebird trying to troll you.