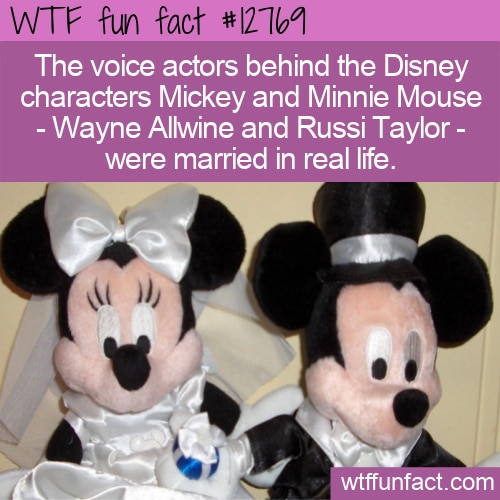 Sometimes Disney love stories do come true. Just take the example of the real voice actors behind the classic characters Mickey and Minnie Mouse. Wayne Allwine and Russi Taylor were married from 1986 until Allwine’s death in 2009.

Are Mickey and Minnie Mouse married?

According to the Disney Parks Blog (cited below), everyone wanted to know if the two cartoon characters were meant to be married.

“In the September 30, 1933 issue of Film Pictorial magazine, Walt Disney was asked if his two stars were married. He explained, ‘A lot of people have written to him asking this question because sometimes he appears to be married to her in his films and other times still courting her. What it really amounts to is that Minnie is, for screen purposes, his leading lady. If the story calls for a romantic courtship, then Minnie is the girl; but when the story requires a married couple, then they appear as man and wife.'”

So, it was a marriage of convenience for the cartoon characters at least.

The real Mickey and Minnie Mouse

But Allwine and Taylor kept their real-life marriage on the down low.

Of course, the creators of Mickey and Minnie Mouse were husband and wife as well – Walt and Lilly Disney!

It just goes to show that the Disney tradition has been a family affair from the get-go. It’s pretty sweet when you think about it.