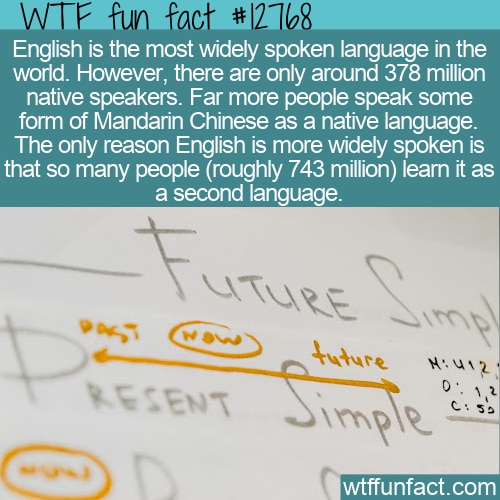 Technically, English is the most commonly spoken language in the world. However, that’s only because of the number of non-native speakers who learn it as a SECOND language.

In fact, English is more popular as a second than it is as a first language.

If you count only native speakers then Mandarin Chinese is the spoken language in the world.

How many people speak ESL?

However, due to the number of people who learn ESL, including many Mandarin speakers, English has become the most widely spoken language in the world.

There are around 743 million non-native speakers who learn ESL in the world. So if you add those to the native speakers, that tops the number of Mandarin speakers.

In 2022, surveys found that 1.5 billion people worldwide spoke English either natively or as a second language. Mandarin dialects still come in a very close second.

Native English speakers, particularly in the U.S., tend to be less likely to become fluent in a second language (despite learning a bit in school).

Interestingly, even though many people the world over speak some English, the country with the highest level of proficiency when it comes to ESL is The Netherlands. Their citizens are more likely to be fluent. They’re followed by Denmark, Sweden, and Norway.

In nearly every country surveyed, women had better ESL skills than men.

Source: “Which countries are best at English as a second language?” – WE Forum