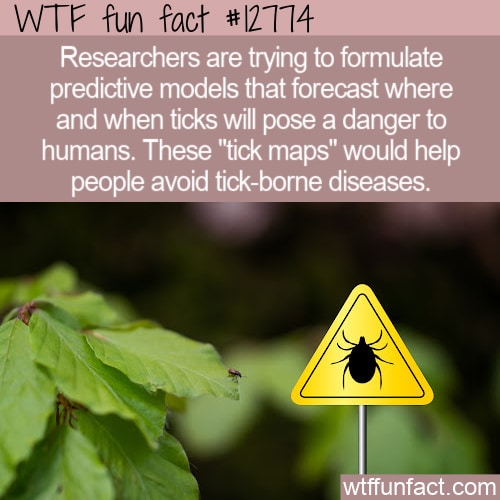 Scientists believe that releasing a “tick map” each year (or as often as needed) would be a great public health strategy to allow people to ward off tick-borne diseases. Now, researchers are trying to make it happen.

Why a tick map?

From hikers to vacationers, each summer and fall people head out to new locales without quite knowing the dangers that lurk in tall grasses and forests. These days, tick-borne diseases are spreading more rapidly than ever and it’s causing some big concerns for health professionals. Some of these diseases can be debilitating, and in many cases, a bit of Deet spray just isn’t enough to avoid the danger.

Enter the tick map. If a map of locations where ticks are common (and commonly associated with particular diseases) was available ahead of time, it would not only help raise awareness of the need to avoid ticks but help people take better precautions.

Knowledge is power, after all. But simply telling people there are risks out there does not lead to enough action to stop the spread of diseases that take major resources to treat.

How does a tick map work?

A tick map would involve some predictions, so researchers are still trying to come up with the ideal way of forecasting the locations. And it’s complicated.

According to Scientific American (cited below): “Many factors, not all of them well understood by scientists, shape where and when disease-carrying tick species will thrive—and if they are likely to carry a pathogen at all. Every year people are diagnosed with and treated for tick-borne illnesses such as Lyme disease, anaplasmosis, and Rocky Mountain spotted fever. For Lyme disease alone, the annual figure is nearly half a million, according to estimates from the U.S. Centers for Disease Control and Prevention. And that number is expected to rise as many tick species continue to expand their ranges.”

The only system we have now is relying on people to know where ticks may be a problem so that they can use tick repellant, wear long sleeves, cover their ankles, and perform tick checks on themselves and their pets.

But if we had a tick map, things might be different: “If hikers, for example, have a forecast indicating that the woods they are passing through are likely to have dangerous ticks, they can take extra steps to protect themselves with bug repellent, long sleeves and tight pant cuffs. Local health care providers can make sure they are looking out for symptoms of tick-borne illnesses. Local officials can advise citizens on how to take care outside during the danger season. But making accurate predictions is complicated. Many factors, not all of them well understood by scientists, shape where and when disease-carrying tick species will thrive—and if they are likely to carry a pathogen at all.”

The other cool thing about having a tick map is that it would show when risks are low, allowing people to relax some of those protocols when they aren’t necessary.

Why is it so hard to build the map?

Risk levels can be hard to gauge, however. Ticks need humid summers, enough animal hosts, and the right habitat, for starters. They don’t like cold winters and hot, dry summers. But there’s way more that goes into creating a predictive model that’s actually useful to people, including specific tick species that carry different diseases or thrive in slightly different environments.

To add to the complexity, we’re still learning about the other kinds of flora and fauna that are abundant in tick-heavy areas, such as a specific type of acorn that one type of tiny mouse feeds on – they’re common when ticks are abundant and they’re a reservoir for Lyme disease. All of those elements need to go into the model. And to top it off, we don’t entirely understand how Lyme disease works.

At the moment, the best data we have is only for one tiny area of the country. Other areas may need different predictive models. According to SciAm, “Data collection is one piece of that puzzle, but another is a better understanding of how ticks interact with host species, both human and nonhuman, and how the arthropods act as conduits for disease.”

So, in the meantime, cover up and check for ticks after a walk in the woods!

Source: “The Quest for a ‘Tick Map’” — Scientific American