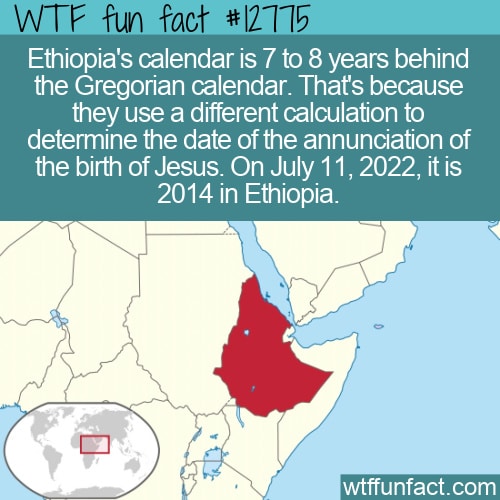 When the rest of the world was partying because it was 1999, Ethiopia didn’t start the millennium until it was already 2008 for the rest of us (oh, and their New Year, or Enkutatash) falls on September 11 – or 12th if it’s a leap year).

How does the Ethiopian calendar work?

Ethiopia runs on the Ge’ez Calendar, which is based on the ancient Coptic calendar. And the reason it’s a few years behind the Gregorian schedule is that it has an alternate way of calculating the Annunciation of the birth of Jesus by the angel Gabriel.

New year’s day can be anywhere from September 11th to October 10th.

What does Jesus have to do with it?

According to Culture Trip, the Ge’ez calendar system “starts with the idea that Adam and Eve lived in the Garden of Eden for seven years before they were expelled for their sins. After they repented, the Bible says that God promised to save them after 5,500 years.”

Now, both the Ge’ez and Gregorian calendars use the birth year of Jesus as the start of their timeline. But the Catholic Church and the Ethiopian Orthodox Church have different ways of calculating that date. The latter believes Jesus Christ was born in 7 BC, which they say is exactly 5,500 years after God made the promise to Adam and Eve.

Then again, in 2012, even the pope came out and said that the calculations of the Eastern European monk named Dionysius Exiguus who suggested we make our calendar in this way are wrong.

So we’re not sure what year it is, but it’s becoming increasingly clear that the date is a purely social construct that isn’t rooted in anything we can factually in down. – WTF fun facts