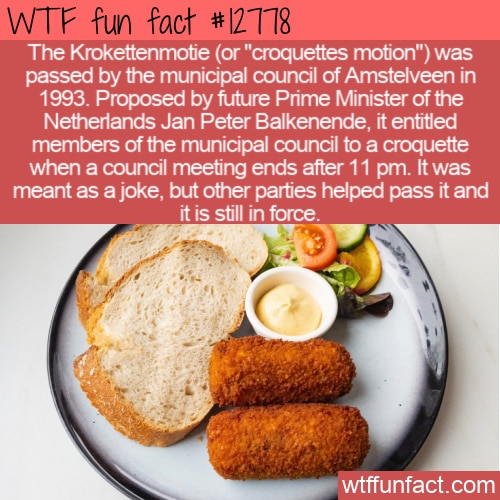 The Krokettenmotie is an obscure motion passed by a council in northern Holland, the Netherlands that entitles council members to a bit of a snack if their meetings run late.

How did the Krokettenmotie come to be?

When the future Prime Minister of the Netherlands, Jan Peter Balkenende, served on the municipal council of Amstelveen in 1993, he proposed the motion. And he fully admits to having had a juvenile sense of humor back in his younger days.

While the “croquettes motion” was meant as a joke, the other council members apparently agreed that any meeting that ran past 11 pm made them deserving of a little snack. The motion passed. Even better, it’s still in force (because why repeal a law that says you get a free deep-fried snack?!).

While it has never been repealed, the Krokettenmotie has been modified over the years, specifically to accommodate vegans and vegetarians.

In 2019, a vegetarian option was added. But that was likely a page taken out of a copycat motion passed in 2002 in Zwolle, which set the time limit to 10 pm and mentioned the option of a vegetarian snack as well.

As the Netherlands has focused more on healthy lifestyles and eating, all of the Krokettenmoties have come into question. After all, it’s not exactly the healthiest snack option. So many municipalities that have debated the croquette controversy have had members demands snacks such as fruit, nuts, and even hummus wraps as alternatives.

It may all sound ridiculous, but the justification behind the genuine debates is that the council is bound to do better work in the late evenings if they’re not hungry. Council members have pointed out that a bit of a nosh will help them make better decisions with clear minds.

Frankly, we’re just glad someone takes their snacks as seriously as we do.