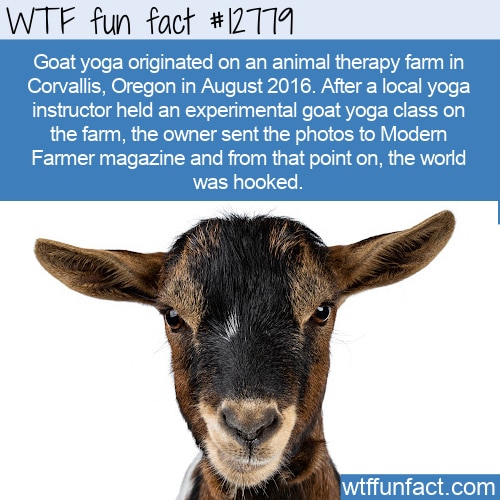 Goat yoga began in Oregon when a local yoga instructor, Heather Davis, asked Lainey Morse if she could hold a class on her animal therapy farm in August of 2016. Of course, the answer was yes and everyone – goats included – seemed to have a great time.

From yoga with goats to Goat Yoga(TM)

When Morse sent photos from that event to Modern Farmer magazine, everyone was obsessed. The practice took off and is now performed all over the world.

According to CNBC (cited below), Morse said of the fateful moment she sent in the photos: “Within a few minutes, they contacted me and said, ‘We have got to do a story on this.’” The story came out and changed her life. “You never know what it means when something goes viral, but it feels like a roller coaster going 100 miles an hour, and you can’t get off.”

“By the time Morse had the business fully up and running, “I had over 2,300 people on the wait list.” She started listing classes on Facebook, and “realized I can’t have 400 people on my farm showing up for goat yoga.” She soon came up with a registration platform to bring order to the process.”

As for Goat Yoga(TM), it’s not really a thing. Trademarks have long been denied and copycats exist everywhere. It did, however, become a 6-figure business. But it’s expensive to run.

“There were other big expenses along the way, like spending thousands of dollars on tents to protect outdoor sessions during inclement weather, only to see the tents destroyed in wind storms. She also had to buy special mats for customers because the goats would eat (or poop on) yoga mats people brought themselves.”

How do the goats feel?

Goats are pretty friendly and show happiness when they’re in good situations. In most cases, they probably don’t mind Goat Yoga too much.

Of course, not all goat yoga teachers are good to the goats, and animal rights activists have taken up the issue. That said, not all goats are the same, so there are probably some goats that would rather be anywhere else. – WTF fun facts