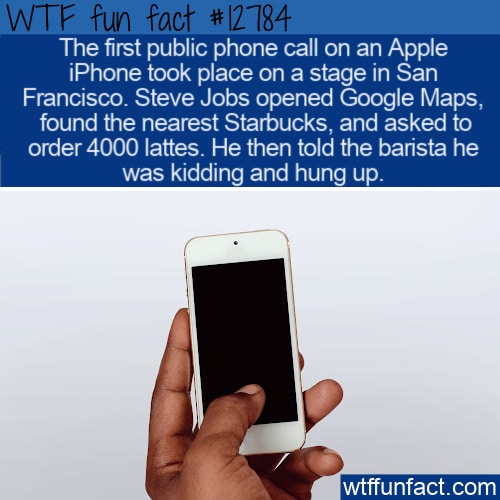 When Steve Jobs introduced the first iPhone, he made a historic phone call. We’re not sure what he was thinking at the time, but he got a bit cheeky when making his decision about who to call and what to say.

And it turns out the first iPhone call was a prank call to Starbucks.

On January 9, 2007, Steve Jobs introduced the iPhone to a crowd in San Francisco’s Moscone Center. He opened up Google Maps on the phone and located the nearest Starbucks.

On the other end was Ying Hang “Hannah” Zhang. “How may I help you?” she asked.

It was a potentially momentous occasion, had the order been filled. But I think we all know that no Starbucks can make that many lattes at a moment’s notice.

And it turns out Jobs was just yanking her chain.

“No, just kidding. Wrong number. Goodbye!” he said as he hung up.

Technically, it was the second call

If you want to get technical, this was the first impromptu call on an iPhone. According to Fast Company (cited below): “His call to the Starbucks that day was the first real public phone call made from an iPhone in history. Sure, Jobs had held a conference chat earlier in his presentation with Apple executives Jony Ive and Phil Schiller–but that call was prearranged and heavily scripted, no different than the dozens if not hundreds of calls they would’ve made during rehearsals, or the likely thousands of calls performed while testing the device prior to its announcement.”

Funny enough, people who know this fact still call up their local Starbucks today and try to order 4000 lattes in honor of Jobs.