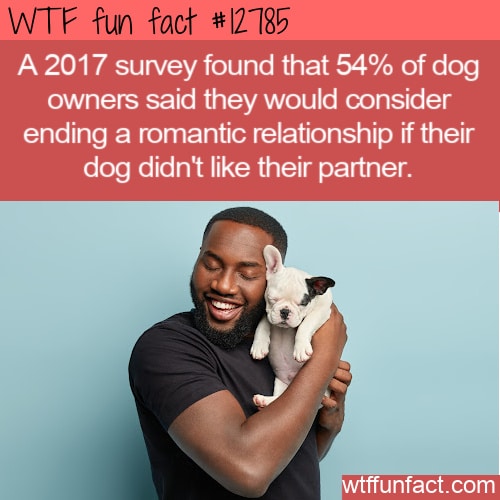 A 2017 survey from Rover.com found that Americans are really fond of their dogs. In fact, “dog people” tend to prefer their pets over people at times.

People think of dogs as family

Aside from the finding that 54% of dog owners said they would consider ending a romantic relationship if their dog didn’t like their partner, the report also noted that:

According to Rover.com’s report on their findings, there are 54 million households in the U.S. wth dogs.

Being a dog owner is even good for our health. “Dog ownership increases leisure time and physical activity by nearly 70 percent.”

According to Rover pet lifestyle expert Brandie Gonzales, “Young Americans are less likely to be homeowners or parents than previous generations, but one category they lead in is pet ownership. They shower their dogs with attention and splurge on expensive gifts because their dog is their best friend, and they want to be their dog’s best friend too.”

Millennials may have killed department stores and traditional marriage, but they sure were a boon for the animal rescue industry! At least one thing has remained stable over time – dogs are still man’s best friend.