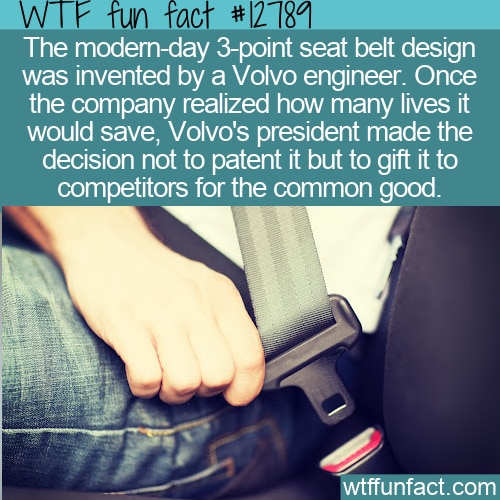 Volvo engineer Nils Bohlin saved countless lives by inventing the V-type three-point safety belt in 1959. And while the Swedish car company could have made millions by licensing the design to their competitors, they decided to gift the design to the world instead of patenting it for themselves.

The story of the seat belt

The two-point (over the waist) seat belt already existed at the time, but for those of us who remember them, they could manage to do harm even at a hard stop. And those weren’t even a standard feature in most cars!

Volvo’s president at the time, Gunnar Engellau, lost a relative to a traffic accident in which the seat belt was part of the problem. It was his loss that inspired him to find the best engineer possible to build a better seat belt.

Interestingly, that engineer happened to work for rival car company Saab. But Engellau managed to hire away Nils Bohlin and tapped him to work exclusively on the new design.

The story of the patent

Car companies patent all of their designs. If they’re good, other car companies have to pay to license them for their own vehicles. If other companies try to copy patented designs, they get sued. A U.S. patent, for example, gives you a 20-year monopoly right over a design.

But the engineers knew that this wasn’t the right thing to do. They had invented something to protect human welfare and retaining exclusivity meant everyone would have to buy a Volvo to be safe.

As Forbes (cited below) put it: “Having sponsored the R&D, they gifted their designs to competitors, to encourage mass adoption and to save lives.”