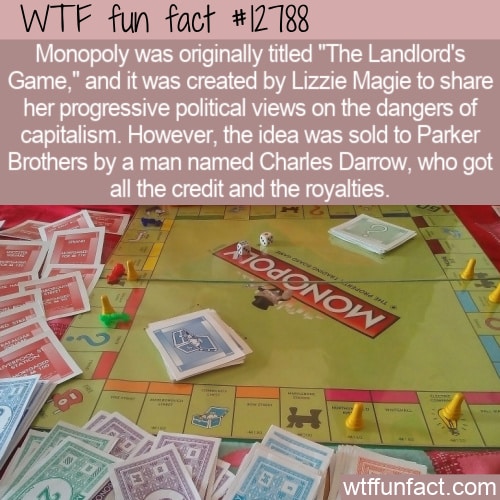 Charles Darrow is credited with inventing the board game Monopoly, but even he wasn’t aware of the real inventor of the game. Lizzie Magie invented Monopoly, only she called it “The Landlord’s Game.”

In 1932, Charles Darrow was playing a real-estate board game with friends. It wasn’t a game you could buy in a box, but one that was passed between friends who made their own boards. Darrow presumably had no clue it had been invented by a progressive feminist writer named Lizzie Magie nearly three decades earlier. She had called it The Landlord’s Game, but it was colloquially known as “the monopoly game.”

Darrow was so taken with it that he asked for a set of rules and took the idea to Parker Brothers. Then he seems to have taken credit for inventing it altogether, which helped him make millions in royalties.

According to The Guardian (cited below), “one journalist after another asked him how he had managed to invent Monopoly out of thin air – a seeming sleight of hand that had brought joy into so many households. ‘It’s a freak,’ Darrow told the Germantown Bulletin, a Philadelphia paper. ‘Entirely unexpected and illogical.'”

Magie wrote about her game in a political magazine in the early 20th century, noting: “It is a practical demonstration of the present system of land-grabbing with all its usual outcomes and consequences. It might well have been called the ‘Game of Life’, as it contains all the elements of success and failure in the real world, and the object is the same as the human race in general seem to have, ie, the accumulation of wealth.”

She created two sets of rules – “an anti-monopolist set in which all were rewarded when wealth was created, and a monopolist set in which the goal was to create monopolies and crush opponents,” according to The Guardian’s story about a book on the history of the game titled, The Monopolists: Obsession, Fury, and the Scandal Behind the World’s Favorite Board Game by Mary Pilon.

Magie had even patented the game and published a version through the Economic Game Company. It was popular among progressive intellectuals, but interestingly enough, the monopolist’s rules became far more popular.

Magie wasn’t sure what to think when Parker Brothers approached her about buying the rights to the game for $500 after they were approached by Darrow, but she did sell them. Only later did she find out why they wanted to buy them. And she never received any of the millions in royalties that Darrow did. Nor did she receive any of the credit until recently.

According to The Guardian, “She died in 1948, a widow with no children, whose obituary and headstone made no mention of her game invention. One of her last jobs was at the US Office of Education, where her colleagues knew her only as an elderly typist who talked about inventing games.”

Today, Parker Brothers is owned by Hasbro, which still credits Darrow with inventing the game in 1935. – WTF fun facts

Source: “The secret history of Monopoly: the capitalist board game’s leftwing origins” — The Guardian