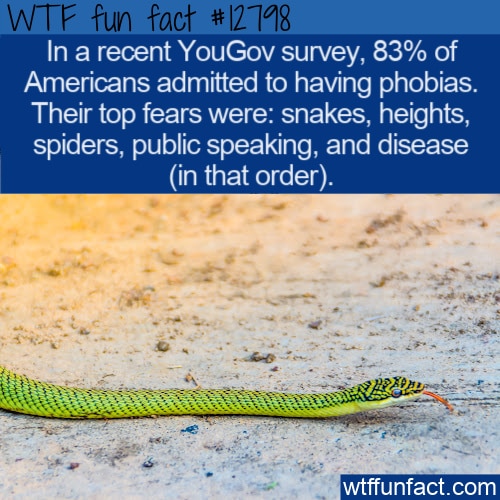 What are you afraid of? A surprising number of people admit to having phobias in the U.S. In fact, a recent YouGov survey found that 83% said they had these genuine fears. And the top phobias were snakes and heights.

Despite the pandemic, disease ranked fifth – after public speaking.

YouGov even broke the phobias down by gender, age, income, and political party! There wasn’t much difference between these categories other than women being more likely to fear snakes, spiders, and crowded spaces.

Men were more likely to say they had no fears. But those who had phobias named heights and public speaking as the things that freak them out most.

Now, the YouGov poll doesn’t use the word “phobia” in the proper psychological way. Phobias can truly affect the way you live your life, and they’re more than just fears.

According to VeryWell Mind:

“The National Institute of Mental Health suggests that phobias affect approximately 10% of U.S. adults each year. These phobias typically emerge during childhood or adolescence and continue into adulthood. They also impact twice as many women as they do men. There are a number of explanations for why phobias develop, including evolutionary and behavioral theories. Whatever the cause, phobias are treatable conditions that can be minimized and even eliminated with cognitive and behavioral therapy techniques and medication.”

In addition, “phobias can lead to marked fear and symptoms such as dizziness, nausea, and breathlessness. In some cases, these symptoms escalate into a full-blown panic attack.”

Phobias may not always be logical (most snakes and spiders don’t want to hurt you), but that doesn’t make the fear less real.

Interestingly, exposure therapy is one common treatment for phobias. During exposure therapy, you’re around the thing you fear the most in order to desensitize you to it and prove that it’s not as scary as you might think. – WTF fun facts