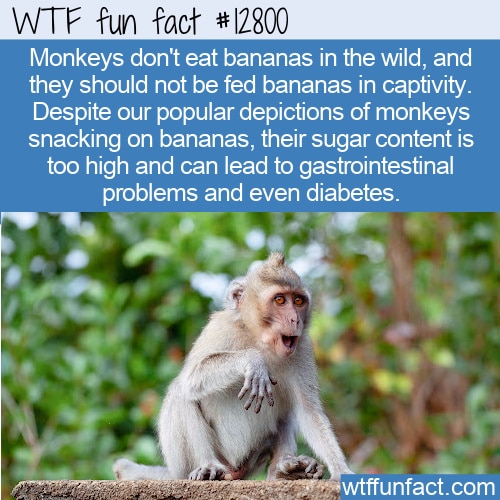 Color us shocked by this one. We had no idea that monkeys don’t actually eat bananas in the wild OR that bananas are actually really bad for monkeys!

Monkeys love bananas the same way we love junk food. And when people first started to keep monkeys as pets, they would give the creatures choices of things that grew locally. It turns out, that monkeys often chose bananas simply because they’re tasty.

If someone asked you what you’d like to eat and put down your favorite snack next to a bunch of vegetables, you’d probably reach for the sugary snack. Our brains love sugar. Unfortunately, for all of us primates, sugar isn’t good for us. It can affect our teeth, interfere with our digestion, make us gain weight, and lead to diseases such as diabetes and heart disease.

The same goes for monkeys.

Bananas are for humans

We think of bananas as healthy because they have a lot of potassium and our bodies are a lot bigger than a monkey’s. When we eat a banana, we taste the sugar, but it’s not really enough for it to be considered “junk food.”

The way bananas are grown, they simply don’t have enough protein or fiber for them to be of much nutritional use to monkeys.

According to Dr. Amy Plowman at Paignton Zoo in Devon (who made news when she banned bananas for monkeys) said: “People usually try to improve their diet by eating more fruit – but fruit that’s cultivated (grown) for humans is much higher in sugar and much lower in protein and fiber than most wild fruit because we like our fruit to be so sweet and juicy…Compared to the food they would eat in the wild, bananas are much more energy-dense – they have lots of calories – and contain much more sugar that’s bad for their teeth and can lead to diabetes and similar conditions.”

Of course, weaning monkeys off bananas is just as hard as telling humans to stop eating sugar. Monkeys should be eating leafy greens instead. Of course, a captive monkey can be stripped of the choice of what to eat, so improving their diet is a lot easier than improving our own. – WTF fun facts