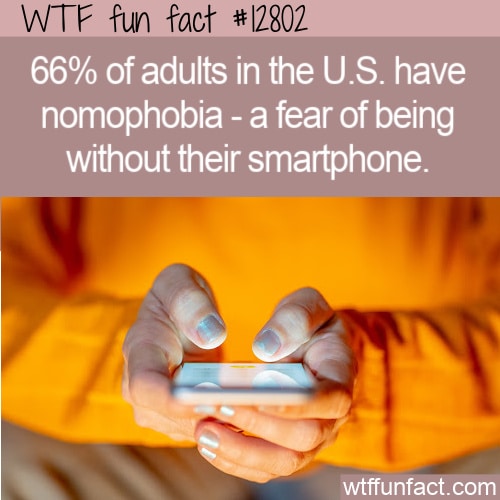 We’re addicted to our smartphones. And maybe you knew that, but did you know there’s a name for the fear of being without your phone? It’s called “nomophobia,” and 66% of U.S. adults suffer from it.

According to Psychology Today (cited below), “The term is an abbreviation for ‘no-mobile-phone phobia,’ which was coined during a 2010 study by the UK Post Office.”

One of the first studies of nomophobia was commissioned by the UK Post Office and conducted by YouGov. At the time, 53% of UK mobile phone users confessed to being anxious when they “lose their mobile phone, run out of battery or credit, or have no network coverage.”

The study also found that nomophobia is actually more common in men – “58 percent of men and 47 percent of women suffer from the phobia, and an additional 9 percent feel stressed when their mobile phones are off.”

Things are even worse in the U.S. Psychology Today reports that “Sixty-five percent, or about two in three people, sleep with or next to their smartphones. (Among college students, it’s even higher.) Thirty-four percent admitted to answering their cell phone during intimacy with their partner…One in five people would rather go without shoes for a week than take a break from their phones…More than half never switch off their phone. (I’d call that an addiction.) A full 66 percent of all adults suffer from ‘nomophobia.'”

Which stat are you most surprised by? For us, it’s the willingness to go without shoes just to spend more time on the phone – have you seen what people throw on the ground?!

If you experience anxiety without your smartphone, there are a few things you can try, including: