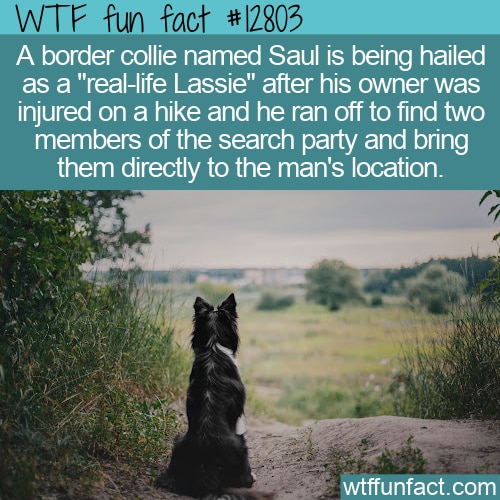 Has your dog ever done something so smart or seemingly compassionate that you’ve compared them to a real-life Lassie?

The Nevada County Search and Rescue certainly feels that way about a border collie named Saul.

In a July 14, 2022 Facebook post, the rescue team described what Saul did for his 53-year-old owner, who was on a hike earlier in the week in Nevada County, California.

On July 12, the duo set out for an adventure, but the man fell 70 feet down the side of a hill. Even worse, he was out of cellular service range at the time and could not call for help.

It wasn’t until the next day that the injured man – who broke his hip and ribs – managed to get himself to an area where his phone worked and call for help. CalFire immediately sent out the Search & Rescue unit, but it was Saul who found them first.

“Earlier today SAR was requested by CalFire to assist in searching for a 53 year old male that had fallen approximately 70 feet and complained of a broken hip and broken ribs. 25 SAR Members responded and located the subject but the true credit goes to the subjects k9 Border Collie that ran through the forest approximately 200 yards and in true ”LASSIE” fashion to flag down two searchers and led them back to the subject which was covered in a camo tarp.

Sar members packaged the subject and transported him to a landing zone a half mile away where CHP H 24 was standing by to transport the subject to a air ambulance a few miles away.

Great work and skill by all involved today and for the Border Collie he was transported back to Grass Valley and given a well-deserved dinner.”

Sergeant Dennis Haack of the Nevada County Sheriff’s Office Search and Rescue told CNN affiliate KCRA: “At first we didn’t believe it because it sounded like a movie. When they came back and actually described it to us, the reality was that they had followed the dog directly to the victim.”

Hiking accidents can be deadly since victims can be hard to pinpoint and locate in wooded areas or in places where satellite service is spotty. The rescuers received the call at noon, but it wasn’t until 7 pm that they managed to read the victim.

But once Saul heard them nearby, he knew what to do.

“(Saul) was jumping up and down and spinning around in circles,” Haack said, according to KCRA.

What a good boy!

Source: “This dog led rescuers to his owner after he fell 70 feet on a hike” — CNN