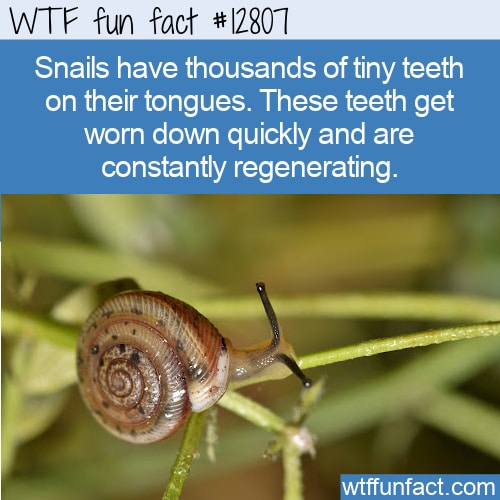 Have you ever wondered how a snail eats? We sure haven’t! But it turns out that snails have teeth laid out along their tongues – thousands of them, in fact.

Snails have teeth, but they’re nothing like human teeth. First, the rows of minuscule teeth are laid out on their tongues. (We never really thought about whether snails had tongues either, to be honest).

According to Dr, Gordon Port, senior lecturer at Newcastle University: “A snail will use its toothy tongue ­– called the radula – almost like a file, scraping off the softer parts of their food when eating. Their teeth normally get worn down by this action, so they’re replaced regularly.”

BBC Science Focus (cited below) describes some of the variations on these “toothy tongues:”

“There are also some (downright terrifying) radula variations. Species such as cone snails – that are mainly found in warm and tropical waters – have a venomous radula that is used to paralyse prey before eating.

In case you’re wondering, slugs also have a radula, which similarly are fitted with thousands of tiny teeth. Some predatory slugs, such as the Welsh ghost slug, have radulae with razor-sharp teeth – each about half a millimetre long – that are used to kill and eat earthworms.

Many squids also have a radula inside their mouth. As its throat passes directly through the brain, a squid’s toothy tongue is needed to break down food into tiny pieces. Because, let’s face it, a piece of crab knocking against your brain is bound to ruin supper.”

What do snails eat?

Snails eat at night for the most part – which we’re grateful for, since they sound like pretty messy eaters.

And Port told BBC that they’ll eat just about any organic matter, like young plants. “And some species, such as Moon snails, are even known to eat each other. But, mostly, any decomposing matter will do.”

As long as snails aren’t chewing your foliage, they can be good for gardens since they eat decomposing matter and then serve as food for other animals.