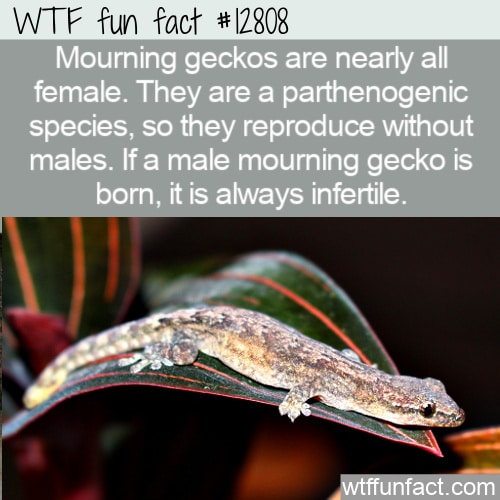 Nearly every mourning gecko ever born has been a female. In fact, the species does not need males at all since the females are parthenogenic, meaning they can reproduce on their own. The female geckos can basically produce semi-clones of themselves to keep the species going.

Characteristics of the mourning gecko

These small lizards look a bit “warty,” but they’re an incredible species. However, it’s pretty rare to see one outside an aquarium. They’re native to southeast Asia, and while they occur throughout the Americas, Australia, and the Pacific islands, they are nocturnal creatures (though they are drawn to walls near artificial lights).

So, what’s parthenogenesis? It simply means females can reproduce on their own, and there are a few different species that can do it (some crabs, snails, and the komodo dragons, for example).

In the case of the mourning geckos, they lay one to two eggs every two to four weeks over the course of their five-year lifespans. The eggs are laid in communal nesting spots and hatch 50 – 75 days later. The baby geckos are able to lay their own eggs after about eight months.

Female geckos clone themselves, in a way. All of the genetic material in the egg comes from them, but they are able to recombine their DNA to produce some genetic variation.

That explains why occasionally males are born. But the males are infertile, so they don’t serve much of a purpose to the species.

The problem with cloning

The downside of cloning yourself is that you have a limited amount of genetic material to work with. If a gene mutation exists, all of the progeny will have it.

If one of those mutations turned out to be fatal, it could spread through a population quickly and threaten its future.

Females can display courtship-like behavior, despite the species having no need for mating. The little lizards bob their heads and use sounds to communicate.

Oh, and they clean out their eyes with their tongues and shed their tails if they’re being captured.