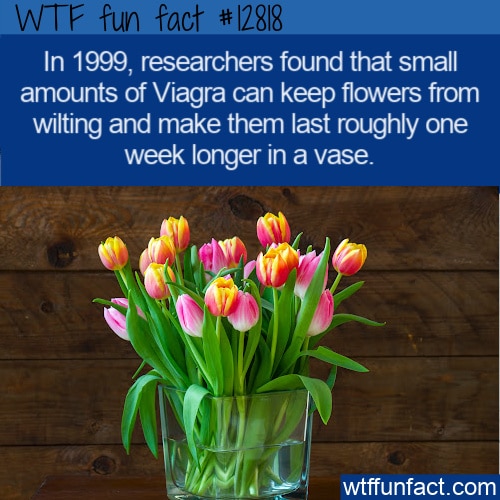 It might not be the most cost-efficient use of the medication, but the answer to “does viagra make flowers last longer?” is yes. It also makes the stand up straight.

According to a study in the British Medical Journal (cited below): “Viagra (sildenafil citrate) is good not only for treating male impotence. Israeli and Australian researchers have discovered that small concentrations of the drug dissolved in a vase of water can also double the shelf life of cut flowers, making them stand up straight for as long as a week beyond their natural life span.”

In fact, “1 mg of the drug (compared with 50 mg in one pill taken by impotent men) in a solution was enough to prevent two vases of cut flowers from wilting for as much as a week longer than might be expected.”

How does it work? Well, according to the study “Viagra increases the vase life of flowers by retarding the breakdown of cyclic guanosine monophosphate (cGMP) (the production of which is mediated by nitric oxide).”

Basically, that means flower wilting and erectile dysfunction involve the same enzyme, and Viagra helps slow down the breakdown of that enzyme. In men, this allows blood vessels to stay open longer, and in plants, it does the same to their vascular tissues.

Of course, you may not want to go through the trouble of getting a Viagra prescription (or raid anyone’s medicine cabinet) for the sake of your centerpieces. There are other ways of getting some flowers to spring to attention. For example, putting a few old pennies (that still have some copper component) in a vase of tulips will also make them stand up straight.

While all of this news came out in 1999, the Viagra method of flower preservation started trending again on TikTok in 2021. – WTF fun facts