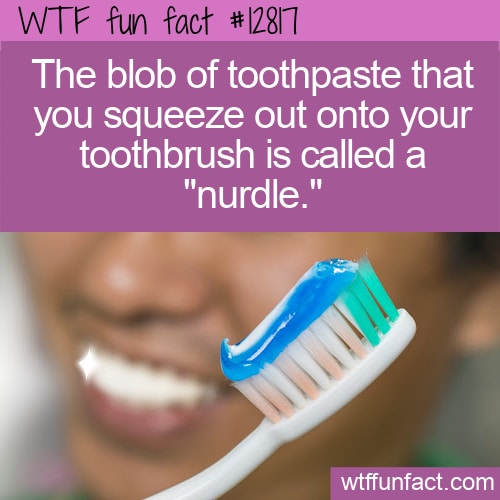 The word nurdle is used in a few different ways. But today we’re going to look at its use to describe the squirt of toothpaste that you squeeze out onto your toothbrush.

How did “nurdle” come to be?

According to “verbal branding pro” Nancy Friedman’s blog Fritinancy (cited below): “The word, of unknown origin but possibly related to nodule, was reportedly coined by the American Dental Association in the 1990s to educate the public about proper brushing technique. The word is spelled “nerdle” in an August 19, 1996, St. Louis Post-Dispatch article quoted in Double-Tongued Dictionary, but the spelling has since been standardized as ‘nurdle.'”

But the word really came to the fore in 2011 when GlaxoSmithKline (which makes Aquafresh “Triple Protection” toothpaste) and Procter & Gamble (which makes Colgate) reached a settlement over its use in their marketing campaigns, with specific reference to the tri-colored nurdle that’s depicted on their boxes.

Both companies have invested money in the depiction and use of the word. Aquafresh used to have a site for children called Nurdle World, and Aquafresh ran a site called The Nurdle Shmurdle – though both have been taken down.

Other uses of the word

Friedman’s blog also describes another use of the word: “Nurdle is also used in the plastics industry to describe pea-size plastic resin pellets. When released from inland factories, the pellets often make their way into coastal waterways and even the deeper oceans, where they pose an ongoing threat to marine animals that mistake the pellets for food. According to a 2001 study of Orange County (California) beaches, nurdles made up 98 percent of ocean debris. See, for example, this 2007 article about the Great Pacific Garbage Patch.”

We’ll be honest. We’ve never heard of a nurdle, and the blob on our toothbrush doesn’t look nearly as nice and nurdle-y as the one depicted on any toothpaste box. Still, we’ll never be able to brush our teeth without thinking of a nurdle again. – WTF fun facts