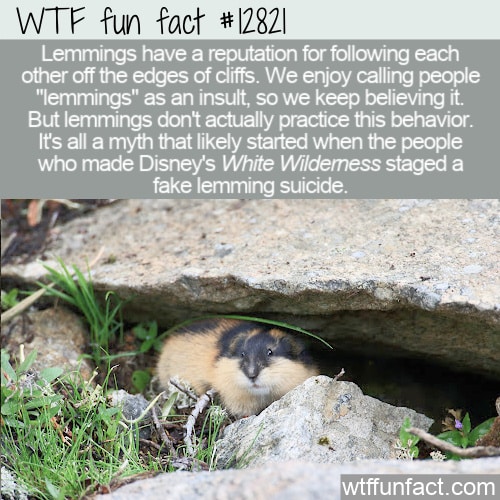 We often use “lemming” as an insult towards people who seem to just go with the flow, even if that means following everyone off the edge of a cliff. It comes from the myth that lemmings commit mass suicide in some unthinking way.

And that’s a load of bunk.

Why do we think lemmings jump off cliffs?

There are a lot of weird myths about lemmings (such as the myth that they explode when angry). But the most popular myth is the one that lemmings will follow each other off the side of a cliff.

And we tend to believe this because it comes with the explanation that people have seen piles of dead lemming bodies.

But it’s just not true.

According to Britannica (and science, in general): “…one myth that has held on tenaciously: Every few years, herds of lemmings commit mass suicide by jumping off seaside cliffs. Instinct, it is said, drives them to kill themselves whenever their population becomes unsustainably large.”

Why we believe, Part 1 – The behavior of some lemmings

Ok, so lemmings do not have any suicidal behavior, They do not follow each other off cliffs or commit any other act of mass suicide. But it may be the case that the myth originates with a few dead lemmings.

The creatures often have population booms. This is bad because too many lemmings in one place means there’s less food and other resources for everyone. As a result, lemmings tend to separate, with a large group heading off to find a better environment.

Of course, they don’t always make it. And while they can swim, crossing bodies of water can be deadly for any group of animals. Seeing some dead lemmings in the water (just because a handful out of hundreds drown) may have led people to believe in the suicide myth.

Why we believe, Part 2

We know a lot about animal behavior, so that raises the question: why do we still believe this even though we could easily look it up and find out it’s not true?

Well, that’s because we find it too believable to question. Or, as Britannica notes: “…it provides an irresistible metaphor for human behavior. Someone who blindly follows a crowd—maybe even toward catastrophe—is called a lemming. Over the past century, the myth has been invoked to express modern anxieties about how individuality could be submerged and destroyed by mass phenomena, such as political movements or consumer culture.”

In other words, we want to believe. It’s too good of an insult to pass up.

Why we believe, Part 3 – The lemming lie

Let’s give ourselves some credit here though. If this myth hadn’t been repeated as fact so many times in so many places, more of us may have questioned it. It’s not a great excuse, but there is some truth to it.

And, apparently, the big lie about lemmings comes from a Disney nature film.

The worst part is that a giant lemming suicide was staged in order to provide fodder for the 1958 Disney film White Wilderness, when “filmmakers eager for dramatic footage staged a lemming death plunge, pushing dozens of lemmings off a cliff while cameras were rolling.”

This fraud led thousands of people who saw the film to say they had seen such a moment in what they thought was a documentary. But it was all a lie. – WTF fun facts