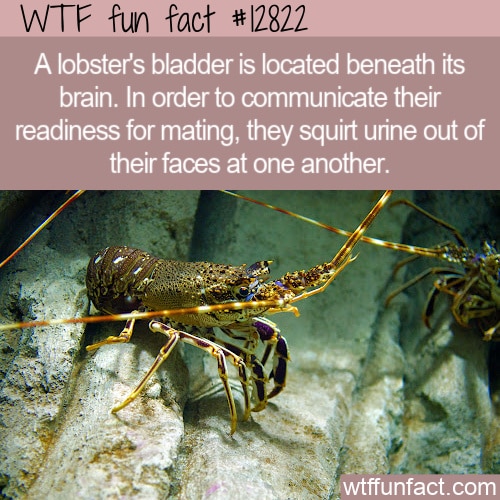 Apparently, thousands of people look up “how to lobsters communicate” – and we’re guessing it’s because they’ve heard the truth and it’s hard to believe.

When we heard that lobsters communicate with their bladders and that they can make things known to other lobsters by urinating at them, we thought it was a grossly creative form of expression. But it gets even better.

While it might not be the most exact description of what’s happening, no less an institution than the New England Aquarium has informed lobster learners that the creatures actually “pee out of their faces.”

Ok, so let’s break this down a bit. First of all, lobsters use scent to communicate (as do humans, to be fair). You’ve heard of pheromones, right? The scented hormone we secrete?

Because this factoid ran rampant around the internet with such gusto, Snopes to it upon themselves to get the details (gotta love those professional fact-checkers!). They describe the scented face-peeing this way:

“Found within a lobster’s pee are a fair number of pheromones, which they disperse through their nephropore rosette glands. The bladder of a lobster is located under its brain, and the rosette glands are connected to the urinary tract.”

Ok, so the key here seems to be the anatomy – the bladder is right under their brain. There’s only so much room in a lobster, and those of us who have eaten them should probably be grateful that we don’t have to pick their bladders out of their tails.

As for the urine stream comes out of their face, Snopes explains further:

“Once these pheromones are produced, they are introduced into the urine stream. In the case of the American lobster, scientific name Homarus americanus, this pheromone-rich pee is released from nephropores at the base of the lobster’s large antennae and then injected into its gill current. According to the NEAQ, it has been determined that this urine stream can reach a length of seven times the lobster’s body.”

Wait, so how do lobsters communicate this way?

You probably still have some questions. Like, what’s a gill current? Well, according to The American Lobster:

“Water passes up through openings between the lobster’s legs, over the gills, and up towards the head.  Every few minutes this current of water is reversed the other way so that debris can be flushed out of the chambers. An important part of this “gill current” is that when it is flowing forward towards the head, it can project urine forward. It is thought that the urine of the lobster contains important information about the sex of the lobster and its physiological state.”

Now that we know how lobsters pee out of their faces, we still need to know how and why it works this way. So, back to Snopes (which is cited below and which also has further reading at the bottom of the page for all your legit lobster urine research needs).

When male lobsters want to attract a mate, the females tend to come to him. But he needs to be in a defensive position. As Snopes says: “Their claws are located at the front, which enables the lobster to back into a shelter and face outward toward the entrance, setting up a first line of defense — and attracting a mate.”

Snopes also cites the conservation organization Oceana, which reports that a male lobster tends to dominate one piece of territory and females wait outside the den to mate with him. To let him know they’re out there, they pee in his direction out of the nozzles on their face.

Hey, who are we to judge?

Of course, the urine contains the pheromones that signal she’s ready to reproduce. So – and here’s another fun fact – she takes off her exoskeleton (basically stripping naked) once she gets into his den to mate. We are seriously not making this up.

Ok, so there’s one mating ritual out of the way. But females aren’t the only ones who urinate out of their faces to send a message. When males fight, the winner will do the same to signal to any nearby females that he’s the winner and ready to pass on his superior genes to any females nearby. “It’s thought that the winner of a match will also contain more serotonin and happy hormones, making him even more attractive to a would-be match.”

Snopes caps us off with yet another fun fact:

“How does a female return the favor? By peeing in his face, of course. Pheromones released in a female’s urine are thought to reduce the aggression of an embattled male and he’ll often allow the female to enter his burrow, where she might stay for up to two weeks. While the two shack up, the cohabitating female will also be urinating to ward off other ladies in the area — until it’s their turn.”