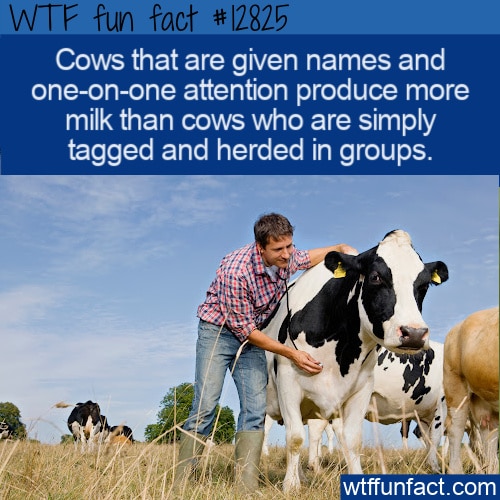 Well, it may not be a big difference, but it is one worth mentioning. It turns out cows with names produce more milk. But they need more than a name – they also like a little one-on-one attention.

According to LiveScience (cited below), a UK study of 516 dairy cows conducted by researchers Catherine Douglas and Peter Rowlinson of Newcastle University found that “on farms where each cow was called by her name the overall milk yield was higher than on farms where the cattle were herded as a group.” But it was just 3.4% higher.

We don’t really know how cows feel about their names, but it’s the personal touch that seems to do the trick.

LiveScience quotes one of the researchers (Douglas) as saying: “Just as people respond better to the personal touch, cows also feel happier and more relaxed if they are given a bit more one-to-one attention. By placing more importance on the individual, such as calling a cow by her name or interacting with the animal more as it grows up, we can not only improve the animal’s welfare and her perception of humans, but also increase milk production.”

Frankly, we think that makes perfect sense. Animals seem to know when their well-being is a priority. And it may even be the case that the farmers who name their cows tend to spend more time caring for them or even value them more (though the study didn’t explore that).

Other things to know about the study include: