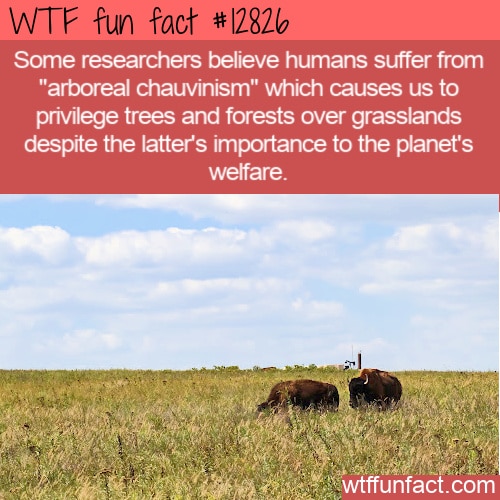 Still, we have to admit we love trees.

Why do we love forests?

In a recent article for The Atlantic, writer Julia Rosen pointed out a painful truth:

“Grasslands rank among the most imperiled and least protected biomes on Earth. They are disappearing even faster than forests, and much of what remains has suffered varying degrees of damage. Their decline threatens a huge chunk of the planet’s biodiversity, the livelihoods of roughly 1 billion people, and countless ecological services such as carbon and water storage. Yet these losses don’t register with the same force as deforestation. Perhaps because we do not notice, or perhaps because we do not care.”

We had no idea. Still, we find ourselves thinking that trees are just more helpful – but apparently, that’s wrong (or at least misguided).

Ok, we’re not fond of the term, but it does some interesting linguistic work when you think about it. A lot of us really do think of grasslands as flat and boring and…beige.

Of course, no one who is advocating for grasslands, such as prairies, is against trees. They’re just trying to raise our awareness and change our perspective so we can appreciate the need to value and conserve them.

In other words, it’s time to stop looking at prairie land as “deforested” area or proto-forests that simply aren’t fertile enough to grow trees – in fact, grasslands are their own special thing.

What’s the big deal with grasslands?

Well, for starters, the problem with disregarding grasslands in favor of trees and forests keeps prairie, savannah, and other grassland plants and animals off of conservation lists and open to extinction.

Check out this not-so-fun fact from The Atlantic: “Just 1 percent of Texas’s prairies remain intact. (Nationally, about half of native grasslands have already been converted to cropland or consumed by development, and millions more acres are lost each year.)”

To appreciate just some of what grasslands have to offer, consider this:

“Despite their apparent simplicity, grasslands are bastions of biodiversity. They support everything from large, charismatic megafauna (think lions and elephants) to humble pollinators and rare wildflowers. The Cerrado, for instance, is home to more than 12,000 plant species, a third of which occur nowhere else on Earth. And a mountain grassland in Argentina holds the world record for the most plant species found within a square meter of land: 89.”

That’s a lot of biodiversity to give up if we don’t remember that forests aren’t the only type of ecosystems we need to preserve.

Source: “Trees Are Overrated” — The Atlantic