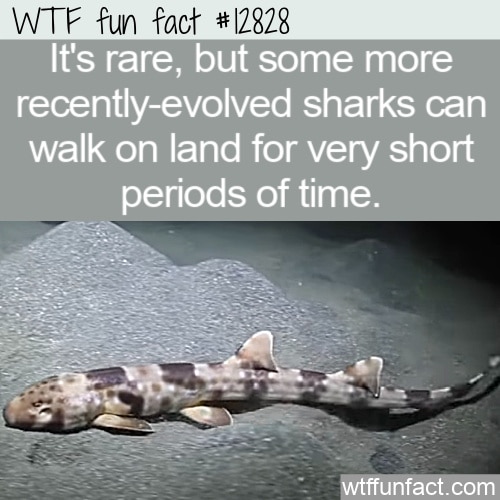 You have to be of a certain age to remember Steve Martin’s LAND SHARK! But when we think of walking sharks, this is where our mind goes. Anything else is simply too terrifying.

Of course, you don’t have to worry about a shark walking down the street. They walk underwater. For now…

Are there really walking sharks?

So, yes, there is a shark that can “walk.” But it’s rare, it’s small, and it’s not out to get you. Sorry to ruin the surprise so early in the explanation.

You may have seen the shark on social media since some guy saw one on a trip somewhere in Indonesia, hadn’t watched enough Shark Week, and then posted a video insisting he discovered a new type of shark. Of course, once marine biologists saw the footage they all said “Yeah, duh, that’s so 2006.” They’ve known about these sharks for a while, discovering them in 2006 in the Bird’s Head Seascape of West Papua, Indonesia.

Conservation International’s Mark Erdmann and his team currently study the walking sharks and their evolutionary origin. (Remember, if humans originated in the wet slime and eventually learned to walk on land, seeing a shark evolve to do the same is extra interesting!). And it turns out there are about 9 species of little sharks that can use their fins to both walk and swim.

So, what’s the real deal with these walking sharks?

According to Conservation News (cited below), these bottom-dwelling sharks “walk” using pectoral and pelvic fins. This allows them to traipse around coral reefs and stick their heads under rocks to look for more food.

Another cool fact about the sharks is that shark geneticists (which is definitely not a job we ever heard about during Career Day) have used genetic samples from shark fins to look at the genomes of these sharks, comparing them to older species to see when each branched off into a new species. In case you didn’t know, sharks are actually older than dinosaurs by about 200 million years. But according to these genetic analyses, walking sharks are only about 9 million years old.

If you’re still more freaked out than fascinated, just not that all 9 species “are found exclusively in a ring around Northern Australia, New Guinea and the satellite islands of Raja Ampat, Aru, and Halmahera in Indonesia.”

If you want to see the walking shark in all its glory, check out the video below: