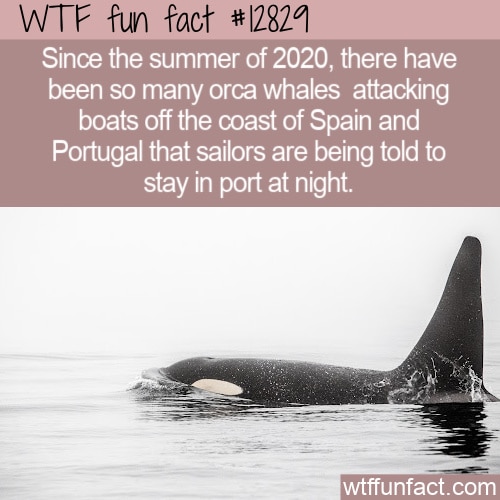 We’ve all seen orcas (aka Orcinus orca and “killer whales”) in photos, theme parks, or films (Free Willy, for example). They’re big, they’re black and white, and they are generally represented as friendly to humans (despite their name). And, to be fair, despite recent orca attacks, the vast majority of orcas have long been friendly – or at least tolerant – towards humans.

What’s up with the orca attacks?

Two summers ago, in 2020, a group of orcas off the coast of Portugal got agitated and started attacking boats. We don’t know why; we just know that it scared a lot of people to have a humungous animal try to nip at the bottom of their boats to the point of nearly sinking them.

Unfortunately, we can’t get the whales’ side of the story.

But we do know that behavior continued and that boaters of the coasts of both Spain and Portugal have continued to have their boats attacked from below by groups of orcas. And it’s gotten so common and so dangerous that some leisure boaters (the tourists, for the most part) are being asked not to go out into the waters for their own good.

The warnings are generally directed at nighttime boaters, who might sorely want to see the beautiful lights of Porto from the sea on a whimsical sailboat, but who would be putting themselves and rescuers in danger if they needed to be saved from capsizing when it’s dark.

Ok, but they are called “killer whales,” right?

Of course, there’s lots of speculation about why the whales are behaving this way, but most of it is just guessing, which isn’t very helpful (because most of it is uninformed and comes from people who don’t know much about the creatures’ behavior).

Some want to blame humans’ disrespect for the sea. And while you might want to make that case and even have some cold-hard facts to back it up, the whales aren’t down there reading our climate and pollution reports (thankfully). And they have no opinion on yachts or rich people who can afford to go to Portugal and rent a sailboat.

And despite the name “killer whales,” they have no real history of hurting humans (in other words, they don’t eat us). The nickname comes from sailors long ago who saw them preying on other whales and even sharks. After all, they’re pretty enormous (weighing in sometimes at 6 tons – or over 12,000 pounds), and they need big meals.

So-called “killer whales” are apex predators. In other words, nothing preys on them – they’re at the top (or apex) of the food chain. They do kill, they just aren’t known for killing humans.

So, what’s the deal?

In one case, investigators found that two of the orca attacks were “perpetrated” by whales that were injured. Whether or not they were injured by boats and seeking to defend themselves is unclear. It could be the case that they were looking to eradicate what they thought was the source of their pain.

But it doesn’t seem like every orca that has attacked a boat is injured.

In some cases, the whales are also young. So it may be that they have a different and more destructive notion of “play time.”

Whatever the issue is, marine biologists agree that there’s nothing premeditated about the attacks. But they are happening and whatever is going on out there (which is under investigation by professionals), it’s much wiser to cancel the pleasure cruises for now and give them a chance to calm down.

Taking preventative measures is a lot smarter than risking getting rammed by a whale (of any kind). – WTF fun facts

Source: “Orcas Attack So Many Boats Sailors Are Being Told To Stay in Port at Night” — Newsweek